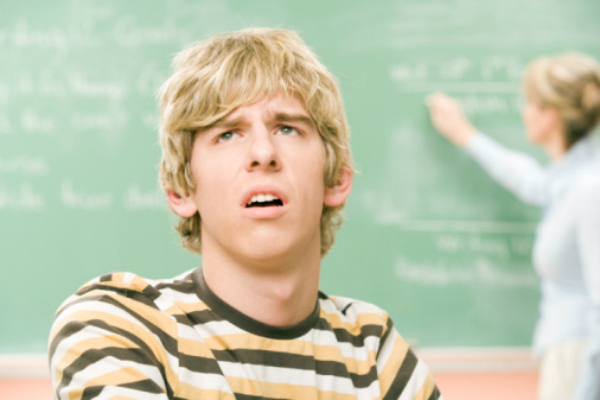 College is supposed to be a place of higher education where people go to learn all of the skills necessary to excel in the occupation of their choice.
And then there are classes like this, which I’m 90% sure only exist as a way to give people a boost in their GPA.

1. “On Being Bored” by Brown University
“This course explores texts/films that represent and formally express states of non-productivity or non-desire.”
If you’re lucky enough to snag a spot in this class before it is full, you’ll be able to learn about the fine art of being bored, and people who were bored at different points in history. Fascinating, no?

2. “Tree Climbing” by Cornell University
“Cornell Outdoor Education’s Tree Climbing course will teach you how to get up into the canopy of any tree, to move around, even to climb from one tree to another without touching the ground.”
Have you ever wanted to pay $64K a year to learn important life-skills like tree climbing? Then Cornell University is the place for you. We all know how traumatizing it is to not even be able to reach the first branch of a tree that you just HAVE to scale, so there is now a class for that! Enjoy!

3. “Daytime Serials: Family and Social Roles” by University of Wisconsin
“Analysis of the themes and characters that populate television’s daytime serials and investigation of what impact these portrayals have on women’s and men’s roles in the family and in the work place.”
Yes, you heard that correctly. They are studying soap-operas and the “impact” they have on the real world. I’ve never been more concerned for the future generation.

4. “Maple Syrup: The Real Thing” by Alfred University
“This class will explore the history of maple syrup production, discover the ins and outs of making syrup, create (and eat) some sweet confections, and take field trips to local producers, restaurants and festivals.”
I’m pretty sure the entire country of Canada chose this class.

5. “Stupidity” by Occidental College
“Stupidity is neither ignorance nor organicity, but rather, a corollary of knowing and an element of normalcy, the double of intelligence rather than its opposite.”
If those words don’t make you want to learn more about the life and times of stupid people, I don’t know what will. While this college is no longer offered at the college, the internet remembers everything, no matter how stupid.

6. “The Road Movie” by Bernard College
“The Road Movie, students analyze and discuss the phenomena of the road trip.”
Who doesn’t want to take a class where all you do is watch movies and talk about everyone’s favorite way to vacation: The road trip? The hardest thing about this class would be deciding which pair of pajamas to wear that day.

7. “How Does it Feel to Dance?” by Oberlin College
“This course is a guided exploration of the social and cultural phenomenon of dancing. We will dance in various contexts, exploring both structured and improvised approaches to moving to music.”
Have you ever wanted to dance, while watching videos about dancing, while analyzing the philosophical and cultural implications of dance? Well boy howdy is this the class for you! Unless you have two left feet. Then perhaps you’d be better suiting for #6.

8. “The Sociology of Miley Cyrus” By Skidmore College
“From Disney tween to twerking machine, Miley Cyrus has grown up in the public eye, trying on and discarding very different identities onscreen and off.”
Study culture and media using pop icon Miley Cyrus as a reference point. From Hannah Montana to gyrating on stage while rubbing a foam finger on her crotch, she is TOTALLY someone worth paying money to study in an educational setting.

9. “The Strategy of StarCraft” by Belmont University
“This course will go in-depth in the theory of how war is conducted within the confines of the game StarCraft.”
While this isn’t the first Blizzard game to receive its own college course, (World Of Warcraft would be the other one) this one is arguably less useful to the real world. There are a lot of social and psychological aspects to social video games like this, and instead you’re getting an “in-depth” study of “how war is conducted” in the game. Profound.

10. “The Science and Psychology of Super-Heroes” by Alfred University
“Mutants, genetically engineered spiders, alien powers and technology fill the comics and movie screens. Do these things even exist? Could there be any kind of rational explanation for a teenage boy squirting spider silk from his wrists?”
Ever wanted to pay an obscene amount of money to learn whether superheroes could actually exist in real life? If your answer was “Well, CHYEAH!” then Alfred University has just the class for you. Take a break from learning silly things like physics and chemistry to analyze the scientific properties of Superman and Wonder Woman.

11. “Disney Feature: Then and Now” by UCLA
“Evaluation of why Disney’s animated features have dominated until recently and ramifications of this dominance on animation and society.”
If you grew up on Disney movies like I did, you may be curious what sort of impact they’ve had on society. I mean, probably not, but you may be one of those people who sees strange implications in just about everything. In that case, this is course for you.

12. “The Science of Harry Potter” by Frostburg State University
“The course, which examines the magical events in J.K. Rowling’s books and explains them through the basic principles of physics, received international attention after an Associated Press writer picked up the story.”
I understand the importance of physics in the world, and I get how using something as universally popular as Harry Potter would make the principles easier to understand, I just don’t see my parents celebrating my acceptance into this particular class. It doesn’t exactly exude professionalism.

13. “#SelfieClass” by Pitzer College
“How do we create our selves? These days, one selfie at a time. And each selfie bears information that can be used to read our identity characteristics: our race-ethnicity, gender, sexuality, and socio-economic status.”
Have you ever wanted to study your own selfies, but didn’t want to be judged by passersby? Well now that is an entire course (that you pay for, of course) dedicated to doing exactly that. How rich or poor is someone who takes a certain selfie? You can learn exactly that! Because useful life skills!

14. “Art Of Walking” by Centre College
“Readings in the non-fiction and fiction of walking; daily walks and rambles in local environs and farther afield.”
Have you ever wanted to pay obscene amount of money to walk and read at the same time? Centre is the college for you. You get to walk through parks while reading books about walking. It’s a physical and mental workout.

15. “Jay-Z and Kanye West” by University of Missouri
“Jay Z and Kanye’s projects are now multidisciplinary, mingling visual and performance arts as integral elements of their albums and concerts, to a greater extent than their predecessors.”
When math, writing, science and philosophy aren’t your jam, University of Missouri is here to offer you a mental alternative. Study the careers of Jay-Z and Kanye West, and how their music is basically poetry. “I got 99 problems, but my GPA ain’t one.”