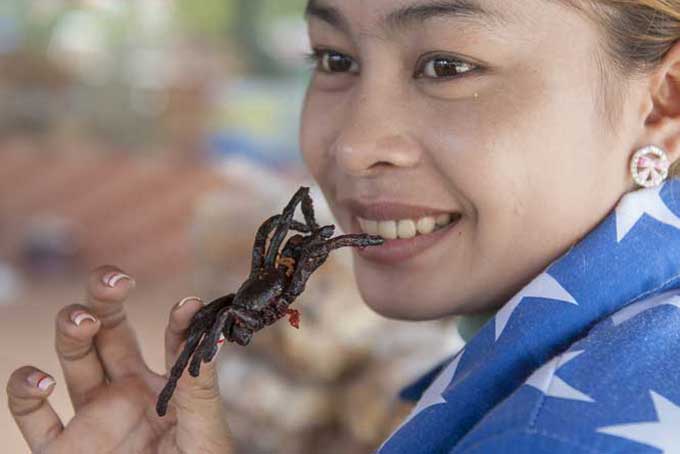 From fried tarantula to live insect larvae, there are plenty of strange delicacies that people eat in different corners of the earth. While these foods may seem delicious to some, they can be an absolute nightmare for others.

So, here are 15 of the weirdest foods from around the world: 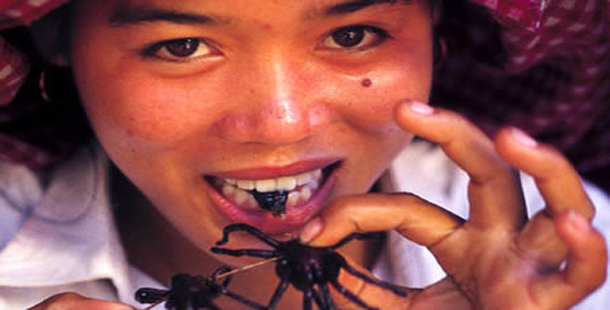 A-ping is fried spider, and it is a treasured delicacy in Cambodia. This eight-legged critter is a specialty snack and a popular attraction among tourists visiting the town of Skuon.
While fried tarantula first became popular during food shortages under the dictatorship of Pol Pot, it has remained a staple food item long after the Khmer Rouge’s brutal reign.

Today, Cambodians eat fried tarantulas like candy. If you can get passed its hairy legs, it supposedly tastes like a cross between chicken and cod.

Fugu is “PufferFish” and a very popular food in Japan. It is also extremely poisonous, and therefore, has strict government regulations on its preparation in restaurants. Only highly trained chefs are permitted to handle the fish. In fact, fugu is so lethal that domestic preparation has been known to cause death. Nearly all PufferFish contain a toxic substance known as tetrodotoxin, which can kill thirty people in one hit. Yet, people still love to eat fugu, and when they do, they put their own lives at risk.

Fugu is usually served as sashimi. While some people consider the liver to be the tastiest part of the fish, it is also the most poisonous. Today, fugu is one of the most celebrated and notorious dishes in Japanese cuisine.

CasuMarzu is a traditional Sardinian sheep milk cheese that contains live insect larvae. Although the larvae are only about 8 mm long, they can expand to 15 cm long when they are disturbed. When you order the dish, you can even see the translucent white insects moving about. Gross, isn’t it?

Derived from pecorino, casumarzu is served in the decomposed state, which is brought about by digestive action of the larvae of the cheese fly. The larvae are introduced to the cheese in order to advance the level of fermentation and breakdown of the cheese’s fats. As a result, the cheese becomes very soft and usually hasliquid spilling out of it.

Balut is nothing more than a fertilized duck embryo that is boiled alive. Popular in South East Asia (especially in the Philippines), this 18-day-old bird still has feathers, a beak, and bones. The word balut means “wrapped”.

This baby bird is often served with beer. However, eating it is controversial for religious and for obvious animal welfare reasons. 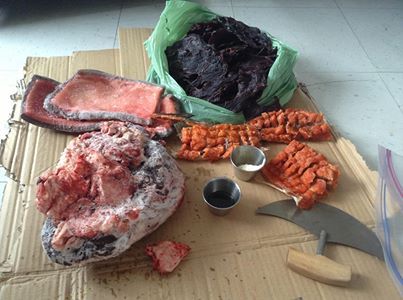 Mattaq, also known as “muktuk,” is an oily/rubbery treat that comes from the skin and blubber of Bowhead Whale.It is normally eaten raw, however, you can get a deep-fried version of it as well. It is served with soy sauce and is sometimes pickled. When it is chewed raw, the blubber becomes oily and has a nutty flavor. Yet, if it is not diced or serrated, the skin tends to be quite rubbery.

Fried-brain sandwich is basically calves’ brains served on sliced bread. It was also a popular item in the Central U.S. until mad cow disease became a major concern. While people still eat them, it is illegal to serve brain from a cow that is over 30 months old at slaughter in the United States.

Yet, fried brain sandwiches remain popular in the Ohio River Valley where they are now served heavily battered on hamburger buns. 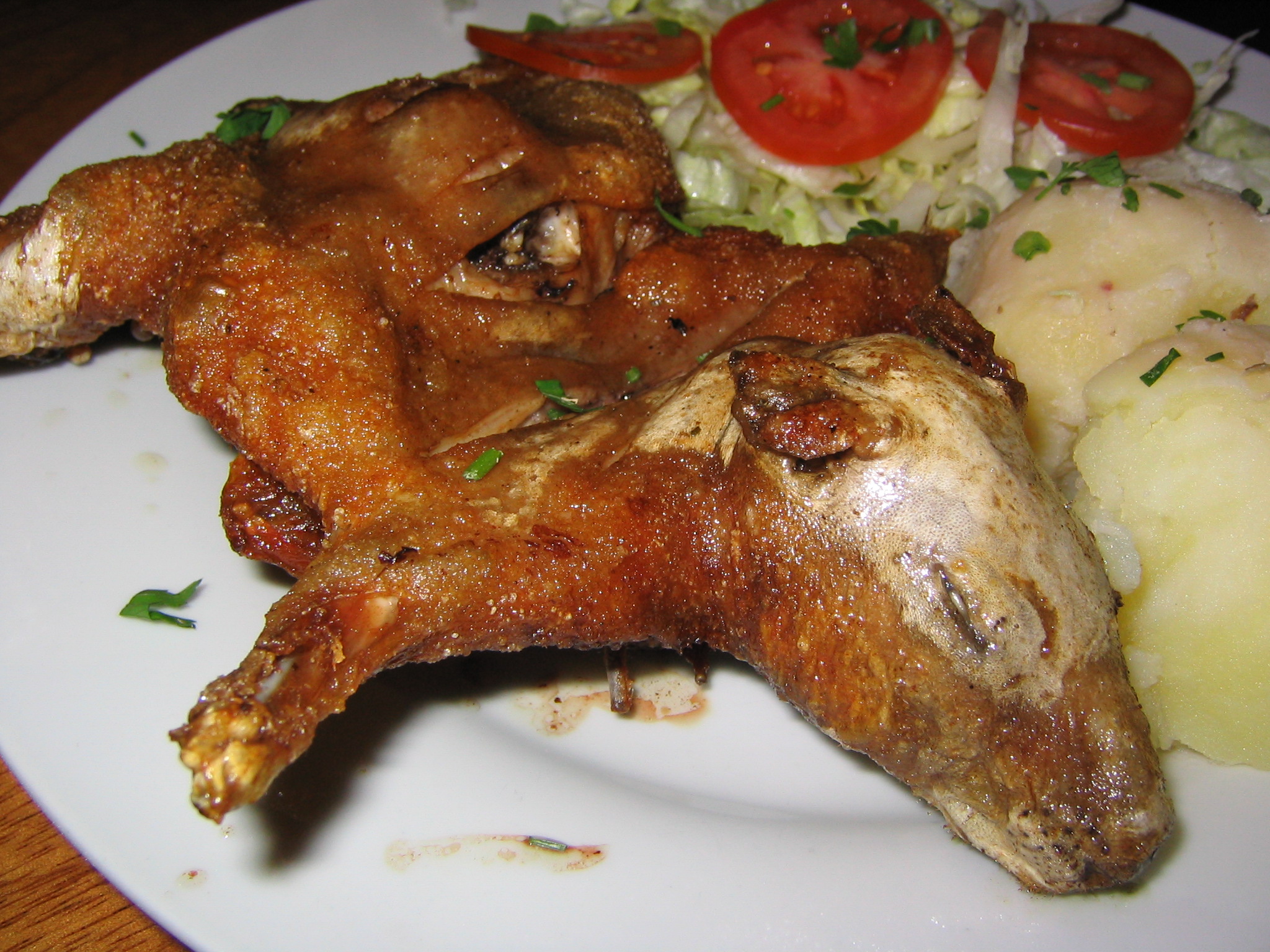 Cuy is guinea pig meat, and it is packed full of protein and low in cholesterol. So, why not eat these little guys? While we have guinea pigs more as pets in the United States, they are a traditional meat item found in Peru. In fact, an estimated 65 million guinea pigs are consumed annually there.

Cuy is usually served stuffed, roasted, or flattened. There are also festivals celebrating these little creatures, with competitions for the largest, best dressed, and best-tasting guinea pig. 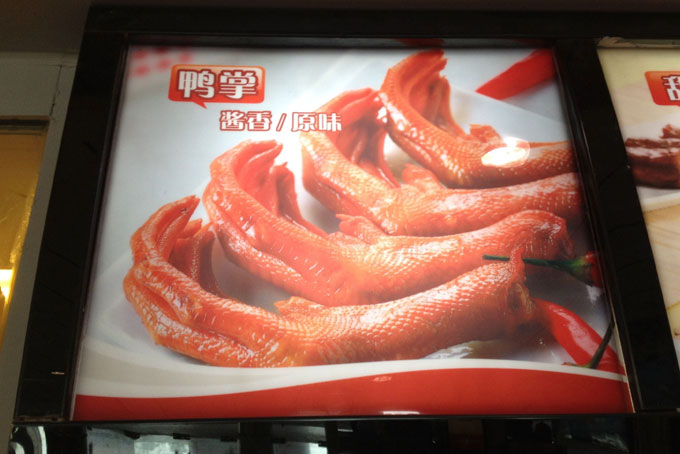 Chicken feet are a popular snack in places in Asia, particularly China. You can get them boiled into a soup for flavor, barbecued, or you can eat them after they have been marinated for hours. They are also served as a beer snack, cold dish, or main dish. Salt-baked chicken feet are even sold vacuum-packed and ready to eat.

Once the outer layer of skin is removed, the edible parts on the feet are the skin and tendons.This gives the feet a unique texture compared to the rest of the chicken’s meat. In fact, chicken feet tend to be very gelatinous.

Stinkbugs are beloved food delicacies in places like Indonesia. Supposedly, these little critters taste like bitter sunflower seeds without the salt. Some even say they have a unique cinnamon flavor while others say they have a bitter medicinal flavor. The bugs are small, less than 1 cm, and they are rich in vitamins B2 and B3. They are also believed to have analgesic and tranquilizing qualities.

Stinkbugs are famous in Indigenous Mexican cuisine as well. They are often used for making a specific sauce or as a taco filling. As taco filling, these creepy crawlers are usually eaten alive. 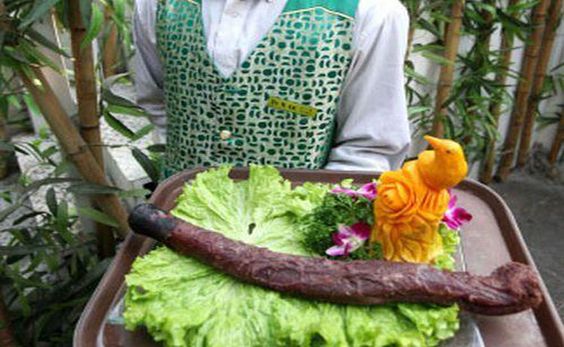 Yak Penis is known to be rich in protein, vitamins, phosphorus, iron, and testosterone. In fact, at one time, the Chinese believed that it could restore the sexual vigor back to the elderly.

Yak penis is usually served sliced and placed in a hollowed-out melon witha drizzle of chili oil and some melon chunks. Fortunately, the melon chunks serve as a nice, refreshing tease between each piece of yak.

The Mopane caterpillar can be found on Mopane trees, and it is an essential protein for millions of people in South Africa. This little worm is brightly colored and has a spiky texture. It is one of the largest caterpillars, about as long as a finger, and as thick as a cigar.

Mopanecaterpillars are typically dried out and eaten as crispy treats. They can be stored for usage throughout the year and are sold at local markets in rural regions and in supermarkets in more populated areas.

Dried Lizard is a very popular dish in Asian cultures. It is used for soup and sometimes infused with alcohol to extract its medicinal properties (although, the process takes years). In fact, these lizards offer health benefits in many different ways. While they are not typically eaten, they are simmered in a pot for hours for their flavor to be released into a soup.

You can find dried lizards mostly in Chinese medicinal shops. They are packed in couples and you have to consume both genders together in the soup in order to get the most effective medicinal results.

Haggis is a traditional Scottish meal made from sheep. You can make this savory pudding by boiling the heart, liver, and lungs in the stomach for three hours. Add some salt, minced onion, oatmeal, suet, spices, and some stock, and you get an excellent nutty texture and savory flavor.

Haggis is usually served with a glass of Scotch whisky.

Nakji, or whole octopus, is a popular dish in places like Korea. The dish is usually sprinkled with sesame oil and toasted sesame seeds.

However, it does come with some dangers. The suckers on the octopus are known to stick to the tongue and mouth causing a choking hazard. In fact, there are several deaths reported each year as a result.

Rocky Mountain Oysters are typically served in parts of the West where cattle-ranching is prevalent. However, they are not really oysters at all, but bull-calf-testicles that are peeled, flattened, and deep-fried. In the Texas Panhandle, they are also called “calf fries,” but only if they are taken from very young cattle.

This dish is mostly found at festivals among ranching families, or at specialty establishments. They are also readily available at a few public venues.