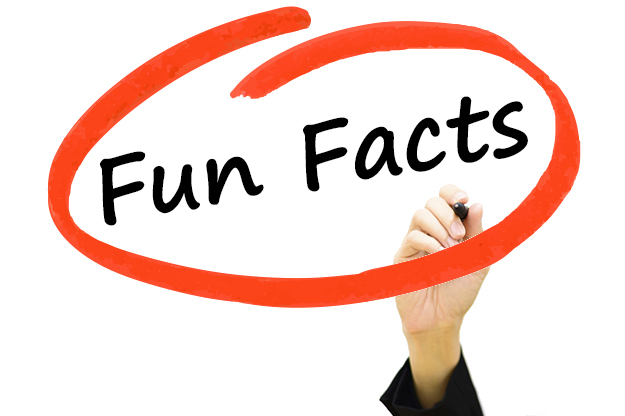 1. The average woman uses her height in lipstick every five years.

2. Cherophobia is the fear of happiness or having fun. I’m sure we all know people that seem like they have cherophobia.

3. A lion’s roar is so loud that it can be heard from up to five miles away.

4. Ever wondered how fast your sneeze is? Turns out, your sneeze travels at about 100 mph!

5. If you feel bad about your mile time, just compare yourself to the sloth. It takes them an entire month to travel one mile.

6. There are more possible ways for a game of chess to be setup than there are atoms in the known universe.

7. When flipping a coin, it is marginally more likely to land on the side it started on than on the other side.

8. Children of identical twins are genetically half siblings, even though they are legally cousins.

10. The human heart can shoot blood up to 30 feet away…gross but cool.

11. The reason orange juice tastes so awful after you’ve brushed your teeth is because the tooth paste blocks the sweetness receptors on your tongue.

12. A ball of glass will bounce higher than a rubber ball provided it doesn’t shatter when it hits the ground.

13. What we know as a French kiss is known as in English kiss in France.

14. On the planets Jupiter and Saturn, it doesn’t rain water like it does here. It rains diamonds.

15. If you were to collect all your saliva from birth until your death, you would have enough saliva to fill two swimming pools.

16. Hippopotomonstrosesquippedaliophobia is the fear of long words. Whoever made this word must have thought they were hilarious.

18. Crocodiles are incapable of sticking their tongues out of their mouths!

19. The average person walks the equivalent of going around the world in their lifetime…twice.

20. More people die every year by coconuts falling on them than by shark attacks.