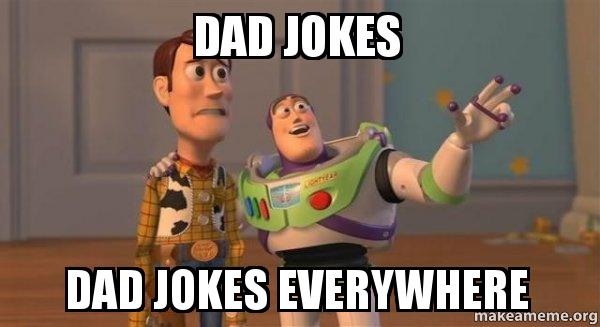 1. My wife accused me of hating her family and relatives. I replied, “No, I don’t hate your relatives. In fact, I like your mother-in-law a lot better than I like mine.”

2. My girlfriend is turning 32 soon, and I told her not to get her hopes up. “After all,” I say, “we’re only going to be celebrating it for half a minute.” When she asked what in the world I was talking about, I pointed out, “This is your thirty-second birthday.”

3. My friend keeps saying “cheer up man it could be worse, you could be stuck underground in a hole full of water.” I know he means well.

4. How do locomotives know where they’re going? Lots of training.

5. What’s the difference between roast beef and pea soup? Anyone can roast beef.

6. The secret service isn’t allowed to yell “Get down!” anymore when the president is about to be attacked, now they have to yell “Donald, duck!”

7. What is the least spoken language in the world? Sign language.

8. My friend has been a limo driver for 25 years and hasn’t had a single customer…All that time and nothing to chauffeur it.

9. A man walks into a zoo. The only animal in the entire zoo is a dog. It’s a shiatzu.

10. Why did the lifeguard not rescue the hippy? He was too far out man!

11. What do you call it when a chameleon can’t change colors anymore? A reptile dysfunction.

12. I used to be a member of the secret cooking society…But they kicked me out for spilling the beans.

13. We can’t take our dog to the pond anymore because the ducks keep attacking him… I guess that’s what we get for buying a pure bread dog…

15. Where do fishes keep their money? In the river banks.

16. If money doesn’t grow on trees, then why do banks have branches?

19. You know what they say about grandfather clocks…they’re old timers!

20. What is Romeo and Juliet’s least favorite fruit? Cantaloupe

21. Why do fish live in salt water? Because if they lived in pepper water, they would sneeze.

23. How do you know if a sniper likes you? He misses you.

25. Joseph Stalin should have known communism wouldn’t work… I mean seriously, there were red flags everywhere.

26. My boy asked me to hand him his sunglasses. I told him I’d do it as soon as he hands me my dadglasses.

27. Why are there no knock-knock jokes about America? Because freedom rings.

28. My neighbor blamed my gravel for making him fall, but it was his dumb asphalt…

31. A traffic cop went to the trouble of leaving a note under the wipers to let me know I’d positioned my car correctly. It said, “Parking fine”. So that was nice.

32. The only thing flat-earthers fear…is sphere itself.

33. My wife complains that I never buy her flowers, but it’s not my fault, I didn’t know she sold any!

35. Did you know there’s no official training for garbage men? They just pick things up as they go along.

36. The inventor of the throat lozenge has died. There will be no coffin at his funeral.

37. What word in the dictionary is always spelled incorrectly? Incorrectly.

39. My wife found out I was cheating on her, after she found all the letters I was hiding… she got so mad and said she’d never play Scrabble with me again.

40. I refused to believe my dad got fired as a road worker for theft. But when I got home, all the signs were there.

41. Why don’t blind people go skydiving? It scares the dog.

42. I am terrified of elevators. I’m going to start taking steps to avoid them.

44. Why does it take a pirate so long to learn the alphabet? Because he spends years at C!

45. I saw an ad for burial plots and thought to myself, that’s the last thing I need.

46. I’ve started a business making boats in my attic. Sails are going through the roof.

47. What’s the difference between pessimists and people with a phobia of sausages? Nothing! They both fear the wurst.

49. Why can’t Harry Potter tell the difference between his cooking pot and his best friend? They’re both cauldron.