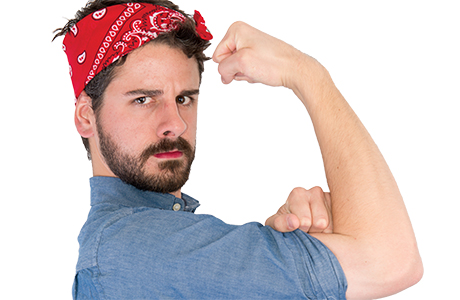 Men and women are different and that’s the way we like it. Men fix things and women make things. This has worked for eons. Why try to “fix” that if it ain’t broke? The problem with the idea of ‘male feminists’ is that some among us are trying to alter biology and nature to create an equality that will never be real. Should men and women be paid the same rate for the same work? Yes! Should they be considered for the same job or college seat for the same test score? Of course! Strangely this basic non-discrimination type of thinking has taken a sharp left turn into a twilight zone like place where men and women should be equal in all things even if it’s scientifically impossible.

When a grown man pretends to “feel your menstrual pain” he’s lying. He has no clue what it feels like and he’s only doing it to placate a woman with impossible standards. If you want a man who likes to pretend (lie, let’s call it what it is) to make you happy then know that he’s not really loving you he’s just afraid of you and your fem-nazi pals. A real man sees you’re in pain and runs down to the store to pick up some medicine and chocolate because they would prefer to fix the problem than wallow in it with you.

2. They need permission to be a man.

Women like to be man handled by the men they love. They don’t want to have to keep saying “yes” to every obtuse question a true male feminist will ask. “Is it okay to hug you?” “Is it okay to kiss you?” “Will you sign this consent form first?” A real man knows when you need a hug, a kiss or a good old fashioned shagging. He takes you and makes you feel like a woman in a loving and yes sometimes rough manner.

Male feminists believe that holding open a door for a woman is sexist. Actually, they believe pretty much all acts of chivalry are sexist so they’re rude and proud of it. A real man shows respect, courtesy and common decency and that never gets old.

4. They’ll encourage you to fail.

Male feminists do the same backwards thinking that hardcore feminists display and that’s that all ‘bad’ things that happen are someone else’s fault. If you don’t get that job you want he’ll encourage you to blame everyone on the planet but yourself. So while a real man may suggest furthering your education or experience in another type of job the ‘boy acting like a girl’ partner will cry with you and help you make voodoo dolls of all the people who have hurt your feelings.

5. Hygiene is a four letter word.

Male feminists have accepted the feminist mantra that all women should be appreciated au natural. So if you want to parade around covered in smells and body hair like Neanderthal then a male feminist is your guy. Hey, if you’ve picked a real good one he’ll cover your furniture with those plastic slip covers from grandma’s house so you can free bleed like a true cavewoman.

Yeah, that’s right, he’ll wear your clothes. Male feminists like skinny jeans, blouses, jumpers and other pretty things that make them look as silly as possible. It somehow helps them show their support for women by dressing like girls. Not sure how that works but since it’s ‘all the rage’ these days there must be something to it.

7. Nothing will ever get fixed.

If you’re not one of those women who can fix anything and everything then you’re either going to need to pick up the phone and call a real man to fix things or let your house fall down around you. Male feminists see being a traditional man who fixes things as “part of the problem” and displaying “toxic masculinity”. On the bright side the money you will save on not buying tools for your lady-man you can use to pay the real man you have to hire.