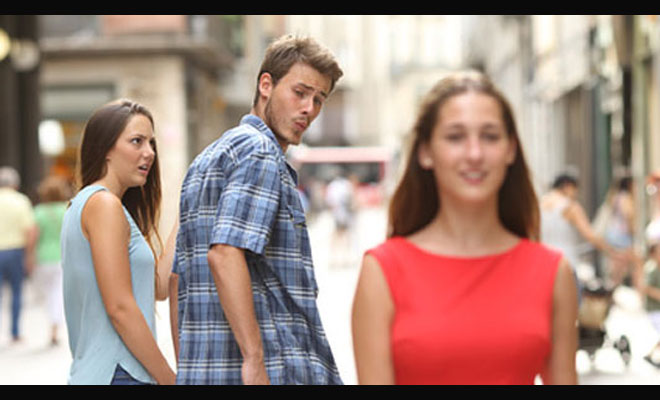 Men and women are very different. Men are made to think logically and women think emotionally. We get that….what we don’t get is why men do things that are mean and think nothing of it. I’ve asked males friends why some men do the things they do and the answer is usually the same, “it’s doesn’t mean anything” and “it wasn’t supposed to hurt anyone’s feelings”. I guess not only do we think different but we have two very different ideas on what can hurt another person deeply.

1. Check out other women right in front of you.
If you’re female then you’ve not only had this done to you but you’ve probably also been the one being checked out right in front of the woman. Nothing makes women feel more disrespected than to catch their man checking out another woman as if she’s not even there. I know its hard guys but if you could just pretend there is no need to check out other girls when we’re around that would be great.

2. Flirt with other women.
It’s one thing to see your man check out other girls in front of you but it’s quite a kick to the gut to watch them flirt with other women. It’s as if they are shopping for a new lady while you’re standing right there. It’s not only insulting but more than likely it’s going to make the woman rethink her choice.

3. Tell you one thing then tell their friends something different.
Isn’t it great to hear your man tell you that you’re best thing that ever happened to him? What’s not so great is to then find out he’s telling his friends that you’re just some girl he’s hooking up with. It seems that some men don’t have the guts to tell their friends they’re in love. Perhaps they think they will seem weak or perhaps they’re telling their friends the truth and only telling you what you want to hear so he can get what he wants.

4. Make promises then break them.
Men who make promises and then break them are just plain cruel. Few things hurt a woman more than having someone think so little of them. Promises are a big deal to women so when a man breaks those promises it’s as if he’s telling her “you don’t really mean that much to me”. Guys, just do yourself a favor and don’t make promises you can’t keep. It will save everyone a whole lot of hurt.

5. Put down things you tell them you like.
Most women will go out of their way to get into the things their men find interesting. It’s what we do to get closer to men. So of course it hurts deeply when men then find out what women like and begin to put it down. It doesn’t matter if it’s music, or a hobby or a favorite place to travel. If the woman talks about it and the man puts it down he might as well just stomp on her heart too.

6. Put down your friends.
Women are very selective when it comes to having friends. They choose them carefully and get very close to them. It’s hard to find just the right gals to hang out with and confide in so when a man puts down his woman’s friends he might as well be telling her that he hates her too. If a man puts down your friends I suggest keeping the friends and getting a new man.

7. Talk about their ex in a glowing manner.
Yes, let’s all be civilized and remain friends if possible. Now that that’s been done can we not have to listen to how great your ex-girlfriend is? Women do not want to hear about the ex, see the ex or God forbid be forced to meet and become friends with the ex. Just let sleeping dogs (no pun intended) lie and leave the oh-so-perfect ex in the past. If the man can’t do that then perhaps he needs to go back to her to be reminded why they’re the ex and the new woman can move on to find a man who knows how to keep his past in the past.