1. When a Black Policeman Joined the KKK

Ron Stallworth was an undercover police officer in Colorado Springs. One day in 1979 he saw an ad in the newspaper placed by the Ku Klux Klan (KKK). The ad said that the Klan was coming to town and was appealing for recruits. Stallworth, who is black, decided to answer the ad and see how far he could get in infiltrating the racist organisation. He called the number in the ad and explained that he was a white man who was sick of black people, especially as his sister was dating an African American. The Klan wanted to welcome into their ranks, but insisted on a meeting.

Officer Stallworth sent along a white colleague, complete with fake non-photo ID and soon had an application form to fill out to join the KKK. The colleague attended meetings for a year, and Stallworth chatted with his ‘fellow’ Klansmen over the phone. He even got to speak to David Duke, the Grand Wizard of the outfit. Ironically, Duke told Stallworth that he could always tell a black man from his voice. When he was offered a leadership position, Stallworth realised that he could take the charade no further and quietly disappeared from the Klan. During his time as a Klansman, Officer Stallworth could gain useful intelligence on the operations activities and prevent any cross burnings in his town. For the rest of his career, he displayed his KKK membership card in a frame in his office. 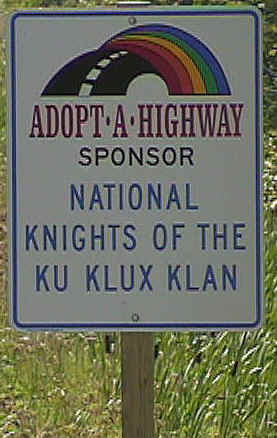 The great state of Missouri runs a scheme whereby organisations can ‘adopt’ a stretch of highway in the state. The scheme, run by the Missouri Department of Transportation (MDOT), gives donors the right to have a sign by the side of ‘their’ stretch of highway announcing their largesse, and requires them to keep that stretch clean – that is litter picking. In 1994 the Knights of the KKK applied to the MDOT to adopt a stretch of Interstate 55. Initially, the MDOT refused the application – why wouldn’t they? Who would want a high-profile highway associated with a bunch of racists? But the Klan took the Department to court and won. The court held that there was no reason to refuse the application, and the 8th Circuit Court of Appeals upheld the ruling in 2000. Not to be deterred, Missouri decided to troll the KKK. Shortly after losing in court, the Missouri state congress renamed the KKK’s road the “Rosa Parks Highway” after the iconic civil rights activist. Thus, Klansmen had to pick litter on a highway dedicated to a great black woman. Of course, they didn’t do it, and the MDOT was able to kick them off the program and remove their sign.

3. David Duke – Agony Aunt
David Duke wanted to present the KKK as a modern organisation, rather than one stuck in the dark days of human history. He founded the Knights of the Ku Klux Klan and tried to make it slick and professional – suits rather than bedsheets, that sort of thing. But Duke is no different than his forebears – a convicted criminal and a Holocaust denier. But maybe he has a helpful side. In 1976, while already Grand Dragon, he wrote a self-help book for women under the name ‘Dorothy Vanderbilt. He called it ‘Finder Keepers: Finding and Keeping the Man You Want’. The book is like a puffed-up agony aunt column or Cosmo piece. Diet and fashion advice sits alongside tender articles that call oral sex “a bedtime snack” and recommends anal sex.

4. The Jewish Klansman
Dan Burros of New York City, was a Jewish Nazi. He was born to George and Esther Burros in 1937. He joined the US Army in 1955, but was discharged after several failed suicide attempts and for ‘reasons of unsuitability, character, and behavior disorder’ – in short, he had become enamoured with Adolf Hitler. Burros joined the American Nazi Party shortly after leaving the army and rose through the ranks to become the party’s National Secretary. He left the party after his Nazi friends began to suspect that he was Jewish. His cause was not helped by the fact that he would bring Jewish food to parties, and go out with Jewish women. Burros then joined the New York chapter of the KKK, and rose to become its Grand Dragon. He tried to hide his Jewishness but investigative journalism by John McCandlish Philips in the New York Times exposed his heritage. Awkwardly, when the story was published, Burros was staying with the Grand Dragon of Pennsylvania. On seeing the story, he grabbed his revolver and shot himself in the chest. He then shot himself in the temple and died. 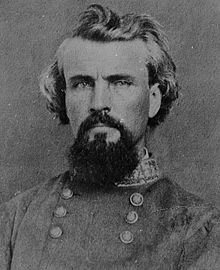 Nathan Bedford Forrest was a slave trader and wealthy plantation owner from Tennessee. At the outbreak of the Civil War, Forrest joined the Confederate army as a private. The army command couldn’t stand such a wealthy man being in such a lowly position so they soon commissioned Forrest as a Lieutenant Colonel. He eventually rose to the rank of Lieutenant General. He was considered a brilliant commander and leader. Union generals Grant and Sherman considered Forrest to be their most difficult adversary. But his record was not clean. He was accused after the war of the massacre of black Union soldiers after the Battle of Fort Pillow. After the war, he became involved in politics, being a delegate to the Democratic National Convention in 1868, and was an early member of the Ku Klux Klan. In fact, it is widely believed that he was the Grand Wizard of the organisation immediately after the war. Later he seemed to repudiate his racist activities speaking to black southerners of the need for reconciliation. In 1986 Winston Groom named his immortal character, Forrest Gump after the KKK general.

6. The Klan and the Lumbee Tribe 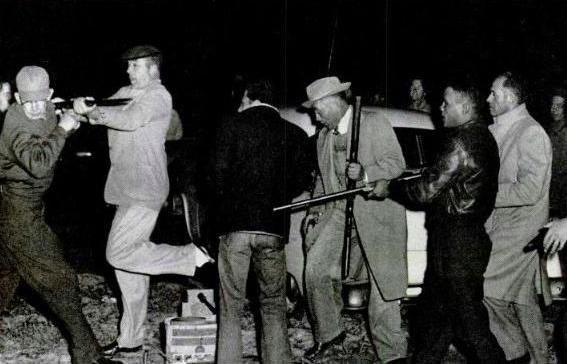 The KKK does not just hate African Americans and Jews, they also hate Native Americans. In Robeson County, North Carolina in 1957, the Klan decided that it would concentrate its persecution on the native Lumbee Tribe. The Tribe was largely of mixed race, and had recently successfully obtained federal protection as a designated Native American tribe. This of course outraged the lunatics of the KKK. Lead by Grand Dragon James Cole, they burned crosses on the lawns of two Lumbee families. To increase the hateful pressure, the Klan organised a rally on January 18, 1957. When the 50 to 100 Klansmen turned up in their bedsheets, they found they were massively outnumbered by over 500 Lumbee men. The Lumbee shot out the lights and in the darkness scared the living daylights out of the Klan, who fled. Cole bravely left his wife behind as he scrambled through a swamp to escape. That was the end of the KKK in Robeson county, and the Lumbee still remember the battle of Hayes Pond.

7. The KKK vs Westboro Baptist Church
The list of the KKK’s enemies is long and well known – gays, Jews, blacks, and most Christians. Funnily enough, that list is pretty much the same as the equally hateful Westboro Baptist Church (WBC) – the one family church run until his death by the sinister Fred Phelps. The WBC goes further than the Klan – they also hate the military. The KKK is very pro-military, and so the KKK hates the WBC. The KKK will quite often stage counter protests to disrupt the WBC’s infamous ‘God hates fags’ protests. On Memorial Day 2011, the two organisations came to blows in Arlington Cemetery when the WBC turned up to show how much they hate dead soldiers. The police were able to stop things before they got started, which is a good thing as no-one needs two hate groups having a punch-up in a cemetery.