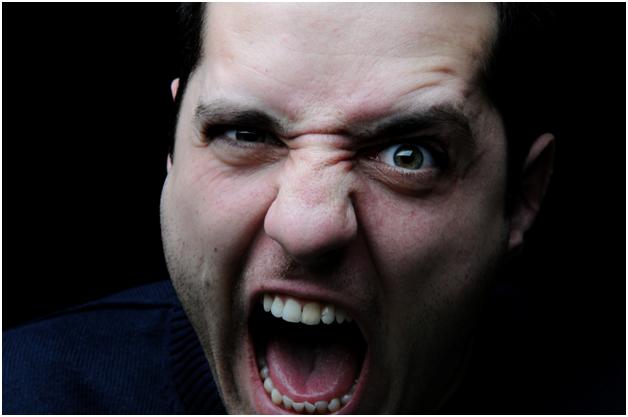 We all know that one couple. The one where the guy is a real b*stard yet his girl can’t or won’t see it. Maybe she’s just too much in love or maybe her self-esteem is just so low that she thinks she actually deserves a b*stard. Either way the rest of us can see it because he displays all the stereotypical signs on a daily basis. For those who don’t know the signs pay attention because this is the last guy you want in your life.

1. He’s got a quick temper and isn’t afraid to show it.

Anyone who is quick to get angry and not embarrassed to show it off is a real b*stard. Anger is actually a manifestation of fear so the guy is actually a big chicken but he’s so full of crap that he’s not able to be vulnerable so anger is his go-to emotion. If you can’t go for a drive without him getting a case of road rage you need to move on.

If you find yourself being embarrassed by his rude and nasty behavior to service workers you need to find a new man. Real men treat other people with respect. Real men know about manners and how to handle themselves in public. If your date treats your waitress like garbage get out while you can. It would probably be best to do it before the food arrives as it will most likely contain spit or something far worse.

3. He talks about himself in the third person.

This is not only a classic characteristic of a narcissist but it’s the actions of real b*stard. This guy always thinks his opinion is the most important one in the room. Stay as far away as you can from anyone who talks about themselves in the third person on a regular basis.

If you can’t do anything right with this guy then he’s not the one. If everything you like is the worst to him he’s showing you that you’ll never measure up to his standards so there’s no use even trying. Clearly he’d rather be alone since he’s perfect and no one else on the planet can live up to that.

5. He’s checks out other women right in front of you.

If your man would rather look at another woman’s butt than look you in the eye while talking to you then you have a b*stard on your hands. He’s showing you that he’s always on the lookout for an upgraded model. I guess you could go join the gym and try to have a perfect body for him but more than likely he won’t even notice because he’ll be checking out someone else while you’re trying to show him the work you’ve done.

6. He hates all your friends and most of your family members.

If the guy you love hates your friends there is a good chance he’s trying to keep you away from them because he knows they have his number. It starts slowly with him telling you he doesn’t like your friends and family for some made up reason. Then eventually he pitches a b*tch every time you want to spend time with them. In the end he tries his best to make it miserable for you to spend time away from him at all and you end up being alone while he does whatever he damn well pleases with whomever he wants.

7. He uses violence and/or threats of violence to control you.

If the man you can’t live without uses violence or threats of violence to get you to do as he says you need to run from him like your ass is on fire. B*stards who beat on you don’t change no matter how much they apologize and promise not to do it again. If he’s only making threats of violence have no doubt he will follow through with them if you push him too far. Of course to “push him” means to be an adult and live your own life no matter what he says or thinks. No one has the right to put their hands on you. Abuse is just an extreme case of control and never, ever ends up getting better.