I popped into Gab just to look around and noticed multiple people gabbing this image: 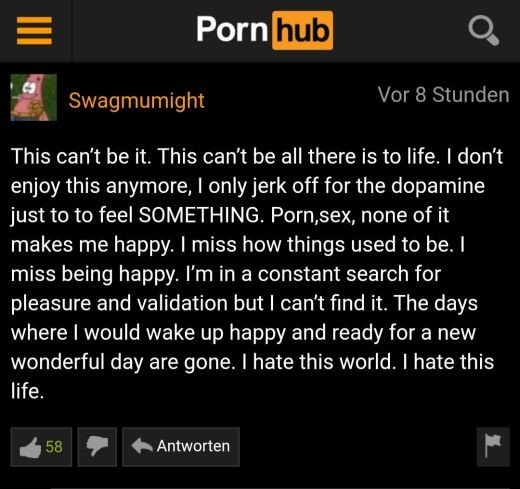 I’ve written about this topic several times in the last few years.

Too many people in our society have forsaken God, family, kids, doing anything for other people, creating anything, or trying to do anything that will last beyond their existence for a life of pleasure. That is no longer hard to do, even for someone in the lower middle class. You can get some pointless, dead-end job that pays enough to enjoy yourself. You eat out a lot, you play video games, scroll memes, surf social media, geek out over movies, binge on TV shows, watch porn, drink and smoke pot — anything “fun” that takes your mind off of the fact that you are going nowhere and your life is meaningless.

Except engulfing yourself in a series of endless, pleasant distractions isn’t really living. It’s empty. It’s pointless. It’s going through your day, knowing in the back of your mind that if you disappeared tomorrow, hardly anyone would even remember you existed because you’ve contributed nothing, added nothing, and were nothing.

People who see their lives as irremediably spoiled cannot find a worth-while purpose in self-advancement. The prospect of an individual career cannot stir them to a mighty effort, nor can it evoke in them faith and a single-minded dedication. They look on self-interest as on something tainted and evil; something unclean and unlucky. Anything undertaken under the auspices of the self seems to them foredoomed. Nothing that has its roots and reasons in the self can be noble and good. Their innermost craving is for a new life — a rebirth — or, failing this, a chance to acquire new elements of pride, confidence, hope, a sense of purpose and worth by an identification with a holy cause

So they smash a window, spit on police at a “peaceful protest” or pull a statue down. The pretend rage against the Confederate statues is just a ruse. If you didn’t understand that before, people should understand it now since they’ve simply moved on to attacking all sorts of statues. Last night in San Francisco, they pulled down a statue of Ulysses S. Grant. Do you think that’s because they have some kind of genuine moral issue with the general that helped win the Civil War for the North? Of course, not. It’s because it’s fun, they can lie to themselves about being part of some important movement and most importantly, because the people in charge are too cowardly to stop them. Here’s Hoffer again:

It has been often said that power corrupts. But it is perhaps equally important to realize that weakness, too, corrupts. Power corrupts the few, while weakness corrupts the many. Hatred, malice, rudeness, intolerance, and suspicion are the fruits of weakness. The resentment of the weak does not spring from any injustice done to them but from the sense of their inadequacy and impotence. They hate not wickedness but weakness. When it is in their power to do so, the weak destroy weakness wherever they see it. Woe to the weak when they are preyed upon by the weak. The self-hatred of the weak is likewise an instance of their hatred of weakness.

Who do you think is out there doing this kind of stuff? Religious people, raising kids right, and doing meaningful work or spoiled brats entertaining themselves on mommy and daddy’s dime while they try to figure out what gender they are? Because their lives are meaningless, they’re trying to squeeze meaning out of moronic acts of vandalism, but guess what? It won’t work because they can’t pull down enough statues to fill the emptiness inside of them. They can try and may keep doing it until they’re stopped, but they won’t be any more content if they pull down every Confederate statue, every statue of a Founding Father, or even the Washington Monument. Their problem is not the monuments, their problem is that their lives have no meaning, and tearing down statues will never fix that.