There’s nothing more thrilling than sitting down at the theater or in the comfort of your own home and putting on an exciting, heart-pumping action flick full of glorious shoot-outs, car chases, and hilariously delicious one-liners and quips.

It honestly doesn’t get better than that, folks. It really doesn’t.

Movie history is stuffed to the gills with action flicks, and most are standard fare for the genre. However, there are some films that contain amazing sequences that have thrilled audiences for years and earned these blockbusters status as must-watch classics.

Here are just a few.

You can’t hear the phrase “action flick” and not immediately think of one of the greatest cinematic works of all-time: “Die Hard.”

While this film is absolutely brilliant from start to finish, with guns blazing, bombs bursting, terrorists biting the dust, and a hero with an unforgettable catch phrase — how can you NOT love a guy who says “yippie-kay-yay?” — what really sets it apart from other films of the genre is the rooftop scene.

As our hero, John McClane, is caught on a rooftop with lots of bad guys gearing up to blow the sucker to smithereens, he decides to take drastic measure to escape certain death by tying a fire hose around his waist and jumping over the side of the building. He then crashes through the glass of a window leading to the inside of the building, but then must escape the hose before it drags him back out to his doom.

It’s easy for a category of films to sort of become stale over time, especially as it grows in popularity, as more and more cookie-cutter, formulaic movies that are basically carbon copies of each other continue to bombard cineplexes everywhere.

And then there comes a film like “The Matrix,” which is a total gamechanger and revolutionizes the genre, taking what was stale and making it fresh again.

There’s tons to love about this movie, but the scene that will really get your heart pumping is the scene in the lobby where Keanu Reeves’ character, Neo, joined by gal pal Trinity, plays a rousing game of shoot ’em up with a bunch of bad guys, complete with killer gravity defying wire work, cool music, and lots of leather.

In short, it’s pure awesomeness with cool sprinkled on top.

George Lucas forever changed the way movies were made and sparked the special effects revolution that led to the amazing, larger-than-life action sequences we have today when he released “Star Wars” back in the late 1970s.

Nothing will blow the mind of a child more than watching the scene where the Rebel Alliance, along with Jedi-in-training, Luke Skywalker, take on the Galactic Empire’s planet destroyer, the Death Star.

Space fighters are blowing up everywhere, heroes are making the ultimate sacrifice, and what will become cinematic history’s most popular villain takes flight to stop the good guys once and for all.

The battle, filmed with models and other practical effects, culminates in Skywalker using his newfound abilities to blow up the battle station and ride off into the sunset. 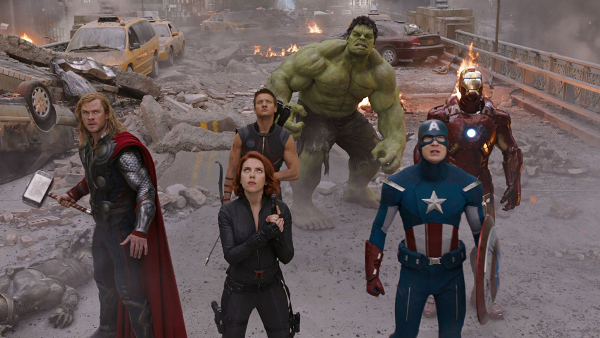 Anyone who knows anything about comic books likely got a chill up their spine and goosebumps on their skin when seeing Captain America, Hulk, Thor, Black Widow, Iron Man, and Hawkeye standing together, truly becoming the Avengers, ready to take on Loki and an army of aliens.

What proceeded was an action spectacle that has become legendary. Cap hands out orders to each Avenger, they go and start picking off aliens all over the place, teaming up and playing off each other’s powers and abilities, preventing the bad guys from leveling the city and killing innocent people.

While the whole sequence is awesome, what takes things to the next level is seeing Hulk let off his leash to wreak havoc on Loki and his minions. The part where he stops a gigantic alien ship with one punch is beyond awesome. 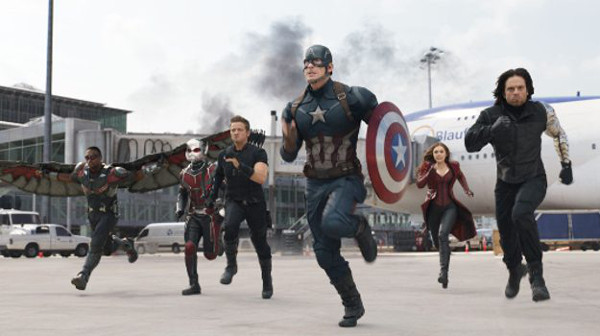 “Captain America: Civil War” is an ambitious film with a ton of heroes in it that start fighting with each other due to differences of political opinion, and boy do the fireworks really fly.

During the start of the film’s climax, all of our heroes meet face-to-face at an airport where a huge battle ensues with the world’s greatest defenders now at odds with each other, ready to break each other’s faces.

We get Spidey doing his quips, Ant-Man becoming Giant Man, and Cap and Iron Man duking it out in an incredible fight scene that might be one of the best ever choreographed in cinema history.

This was truly a gamechanger that will be hard to beat.

There are a lot of epic battle scenes in the “Lord of the Rings” series, but what goes down in the second installment of the trilogy at Helm’s Deep is a total action masterpiece.

Sauron and Saruman’s massive army of orcs are bringing war to the realm of men by attacking Helm’s Deep, where a load of awesome warriors are inside a fortress ready to defend their people to the death.

You have orcs, elves, awesome warriors, and a dwarf all hacking and slashing through countless numbers of bad guys, in the rain, with giant boulders flying everywhere.

It’s a super long sequence, but even after countless viewings, it’s still awesome to behold. 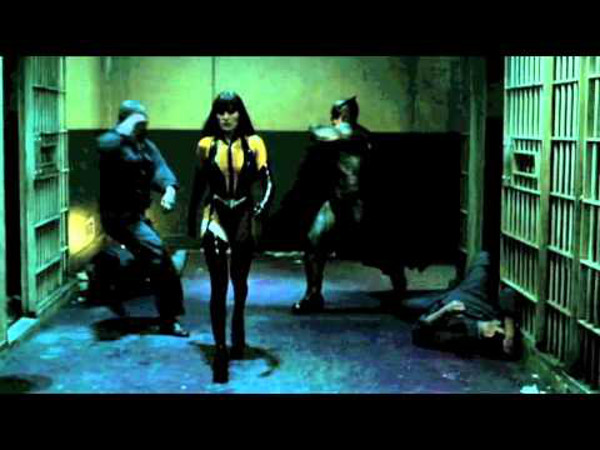 Zack Snyder’s “Watchmen” film is a gritty take on what the world would look like if superheroes were actually real, and while there’s a lot of great violence and darkness abounding, the scene that stands out here is when Silk Spectre and Nite Owl attempt to break a masked vigilante known as Rorshach from prison.

With lots of slow-motion, killer hand-to-hand combat, and ruthless skull crushing, this film represents what the “Avengers” would REALLY be like if they truly existed, or the fights they get into were more realistic.

Once again, “The Matrix” series makes an appearance on the list, this time for an absolutely mind-blowing car chase involving phantom twins that can phase in and out of vehicles.

One of the highlights of the scene is when Morpheus fights an agent on the top of a semi-truck, and Trinity — complete in shiny leather — expertly navigates a motorcycle through all kinds of heavy traffic, performing death-defying maneuvers that totally violate the laws of physics.

It really is beyond description, so I highly suggest you check it out. 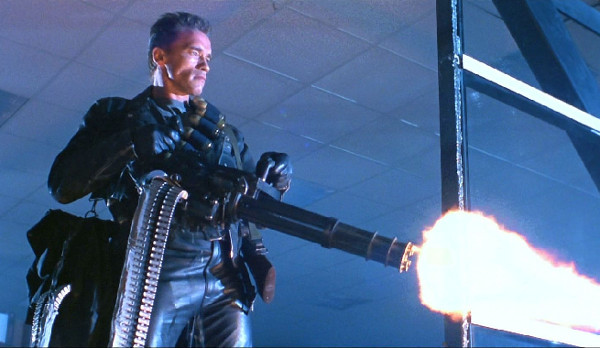 When it comes to action, Arnold Schwarzenegger is the king, and the Terminator franchise is without a doubt his crowning achievement, particularly the second installment.

There’s a ton of great action and story in this film, but the stand-out scene, one that is now a classic of the genre, is when Arnie, Sarah Connor and future leader of the human race John Connor set out to destroy a company that’s going to build Skynet, the artificial intelligence that launches Judgment Day. 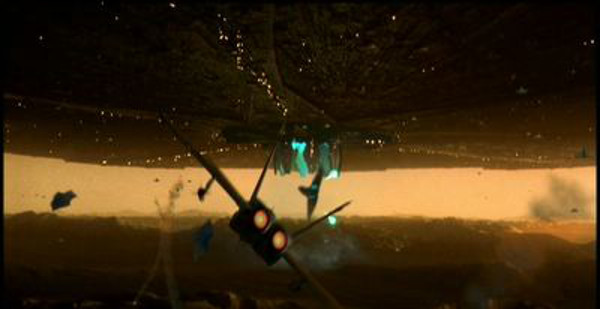 When it comes to action flicks about alien invasions, it’s hard to top the 90s classic “Independence Day.” How can you not love a movie with Will Smith and Jeff Goldblum? They’re perfect together.

The standout scene is the fight at the end when humanity from around the world joins forces together to stop the aliens from destroying earth, launching an air assault that is an amazing special effects bonanza.

Add to that the scene where Goldblum and Smith head to the mothership to put the final nail in the invaders’ coffin and you have a masterful climax to a well done sci-fi action thriller.