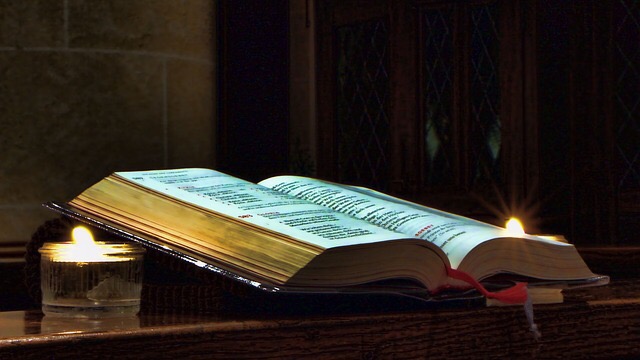 When people think of the Bible, they don’t often remember that much of it contains the history of the Jews and early Christians. And that history, my friends, was bloody. Wars, smitings, stonings, martyrdom, vicious wishlists for enemies, and bloody prophecies dot the Bible as they do any tale of human life spanning thousands of years.

Below are the twenty most savage verses, according to the combined wisdom of the Internet. Your mileage may vary; there are hundreds from which to choose.

20. Deuteronomy 25 11-12
If two men are fighting and the wife of one of them comes to rescue her husband from his assailant, and she reaches out and seizes him by his private parts, you shall cut off her hand. Show her no pity.

19. Galatians 5:12
I wish those who unsettle you would emasculate themselves!

18. Ezekiel 4:12
And thou shalt eat it as barley cakes, and thou shalt bake it with dung that cometh out of man, in their sight.

16. Judges 4:21
But Jael, Heber’s wife, picked up a tent peg and a hammer and went quietly to him while he lay fast asleep, exhausted. She drove the peg through his temple into the ground, and he died.

15. Acts 1:18
With the payment he received for his wickedness, Judas bought a field; there he fell headlong, his body burst open and all his intestines spilled out.

14. Judges 3:21-22
Ehud reached with his left hand, drew the sword from his right thigh and plunged it into the king’s belly. Even the handle sank in after the blade, and his bowels discharged. Ehud did not pull the sword out, and the fat closed in over it.

13. Hosea 1:2
The beginning of the word of the LORD by Hosea. And the LORD said to Hosea, Go, take unto thee a wife of whoredoms and children of whoredoms: for the land hath committed great whoredom, departing from the LORD.

12. I Samuel 15:32-33
Then Samuel said, “Bring Agag king of the Amalekites here to me.” So Agag came to him cautiously. And Agag said, “Surely the bitterness of death is past.” But Samuel said, “As your sword has made women childless, so shall your mother be childless among women.” And Samuel hacked Agag in pieces before the Lord in Gilgal.

‭‭11. 2 Kings‬ ‭2:23-24‬
And he went up from thence unto Beth–el: and as he was going up by the way, there came forth little children out of the city, and mocked him, and said unto him, Go up, thou bald head; go up, thou bald head. And he turned back, and looked on them, and cursed them in the name of the Lord. And there came forth two she bears out of the wood, and tare forty and two children of them.

10. Psalm 58:8
May they be like a slug that melts away as it moves along, like a stillborn child that never sees the sun.

9. Deuteronomy 28:56-57
The most tender and refined woman among you, who would not venture to set the sole of her foot on the ground because she is so delicate and tender, will begrudge to the husband she embraces, 5 to her son and to her daughter, her afterbirth that comes out from between her feet and her children whom she bears, because lacking everything she will eat them secretly, in the siege and in the distress with which your enemy shall distress you in your towns.

8. Numbers 25:6-8
Then an Israelite man brought into the camp a Midianite woman right before the eyes of Moses and the whole assembly of Israel while they were weeping at the entrance to the tent of meeting. When Phinehas son of Eleazar, the son of Aaron, the priest, saw this, he left the assembly, took a spear in his hand and followed the Israelite into the tent. He drove the spear into both of them, right through the Israelite man and into the woman’s stomach.

7. 1 Samuel 15:3
Now go and strike Amalek and utterly destroy all that he has, and do not spare him; but put to death both man and woman, child and infant, ox and sheep, camel and donkey.

6. Isaiah 9:19
Through the wrath of the Lord of hosts is the land darkened, and the people shall be as the fuel on the fire: no man shall spare his brother.

5. Judges 15:16
And Samson said, With the jawbone of an ass, heaps upon heaps, with the jaw of an ass have I slain a thousand men.

4. Judges 19:29
When he reached his house, he took the slaughtering knife and took hold of his concubine and cut her up limb by limb into 12 pieces and sent one piece into each territory of Israel.

3. Psalms 68:21
But God will smash the heads of his enemies, crushing the skulls of those who love their guilty ways.

2. Isaiah 34:2-3
He hath utterly destroyed them, he hath delivered them to the slaughter. Their slain also shall be cast out, and their stink shall come up out of their carcasses, and the mountains shall be melted with their blood.

And Number 1 for the sheer savagery of the image, Psalm 137:8-9:
Daughter Babylon, doomed to destruction, happy is the one who repays you according to what you have done to us. Happy is the one who seizes your infants and dashes them against the rocks.