Do you enjoy going on freaky adventures to see haunted sites?

If so, here are 7 of the creepiest place on Earth that you may want to visit: 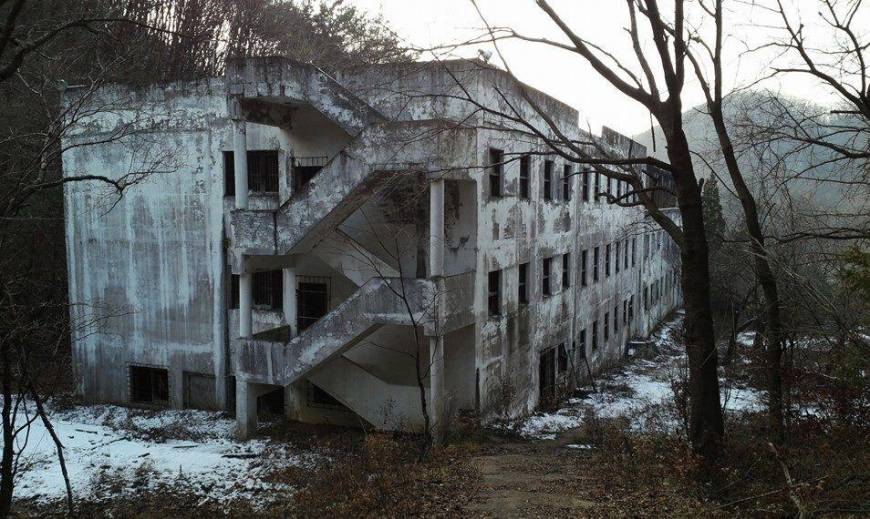 The Sedlec Ossuary is a small Roman Catholic chapel located beneath the Cemetery Church of All Saints in Sedlec, in the suburbs of KutnaHora, Czech Republic.

While the Sedlec Ossuary appears to be an average-looking old medieval gothic church on the outside, the interior is artistically decorated with more than 40,000 human skeletons.

Thus, it is known as the Church of Bones or as the Bone Church.

It is also among the most visited tourist attractions of the Czech Republic, hosting over 200,000 visitors each year.

Each corner of the chapel has four enormous bell-shaped mounds. However, the most notable creation is the gigantic chandelier made of bones that hangs from the center of the room. Garlands of skulls also drape the vault, and a coat of arms of the Schwarzenbergs is located on the left.

While it seems rather creepy to think of such sick features like a chandelier of human bones, the purpose behind it was to save space. In fact, bones were freely given from the bodies of devout Catholics all over Europe. Many wanted to be buried in this chapel because Golgotha soil was brought here from Jerusalem. Golgotha is where Jesus had been crucified. 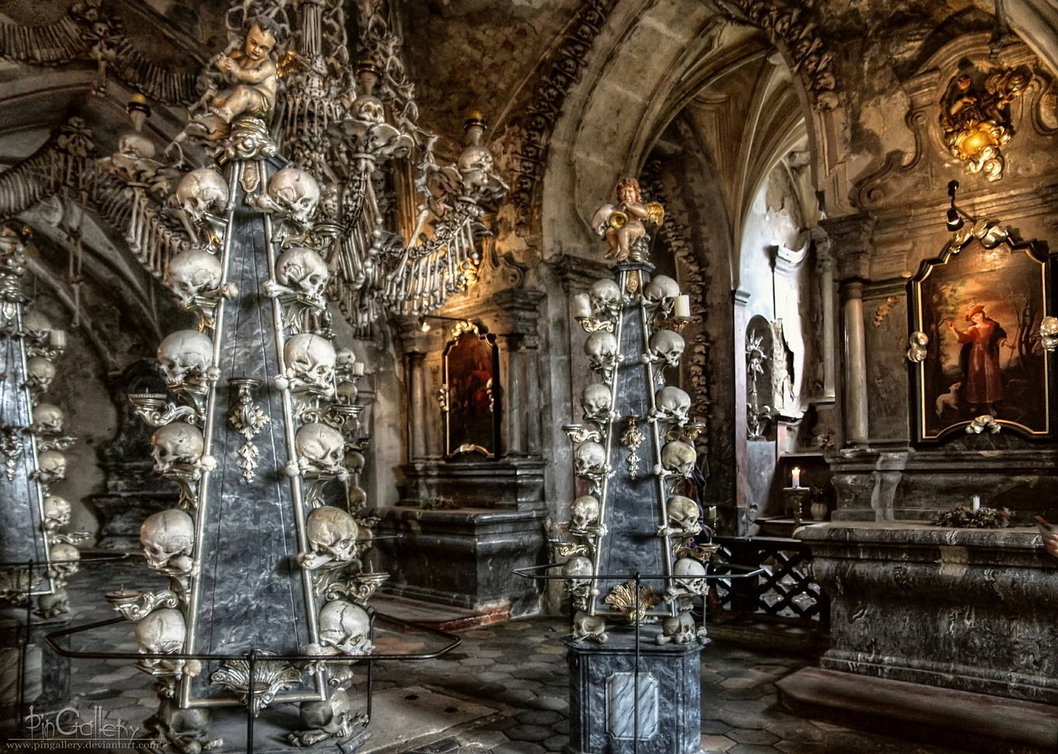 This eighty-two mile stretch of Alaskan shoreline is certainly a freaky sight to the human eye as it is lined with huge skulls, jawbones, ribs, and vertebrae of slaughtered beluga whales.

The bones are thought to date back to the 15th century and may have been used as a monument or shrine for worship by the local tribes or villages that inhabited the region at that time.

There is also some speculation that it may have had a ritual purpose, perhaps for initiation rites. Others also speculate that it may have been a location of common trade. In fact, the large square pits are believed to have been “meat pits” or in-ground refrigeration-used by merchants to keep their products fresh for trade.

Either way, the collection of bones is deliberately constructed in such a way that makes it a perplexing and haunting sight. 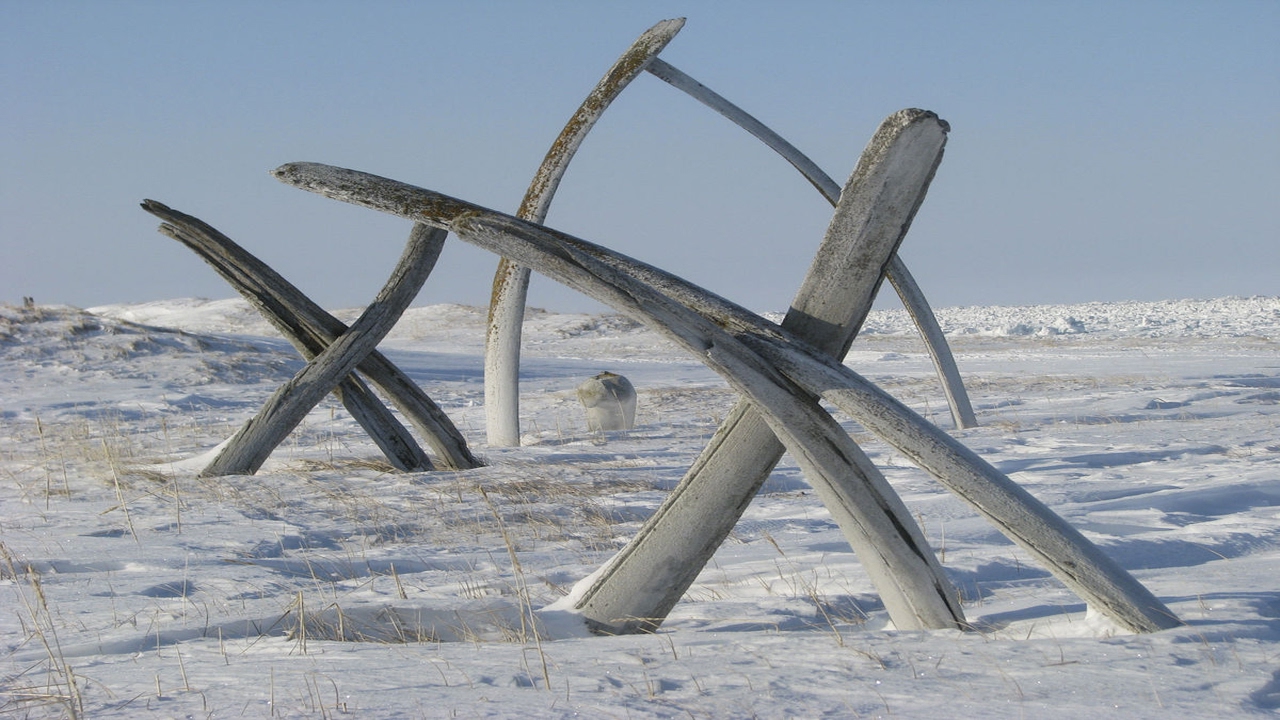 This hauntingly hazardous and abandoned amusement park was not even open one day before it permanently closed following the April 26, 1986 Chernobyl Nuclear Power Plant disaster.

In fact, the entire city was forced to evacuate to avoid the dangerous levels of radiation. While the park never officially opened, it operated on April 27th to boost morale as the people were evacuating town.

Decorations still remain today at the deserted park near all the abandoned rides. The Ferris wheel has become eerily symbolic of the nuclear disaster. Visitors also sometimes leave stuffed animals in the seats of the cars as a memorial.
While the government now allows for tours of the park, it still contains high levels of radiation. This park has stood for the past 30 years as reminder of all those who died in the disaster. 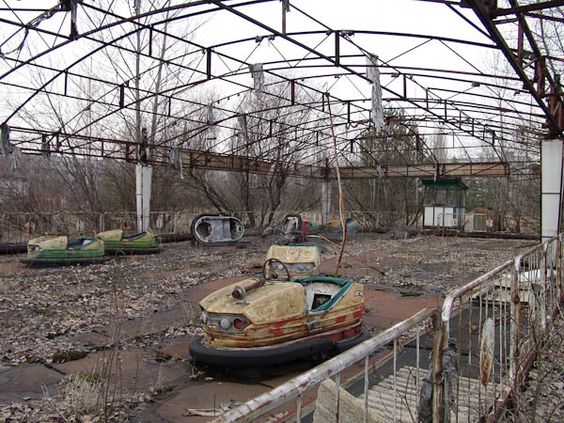 This place is every cat-hater’s worst nightmare. “Cat Island” (AKA Tashirojima) is a creepy cat-infested island that lies in the Pacific Ocean off the Oshika Peninsula.Itis brimming with stray cats due to the fact that the locals believe that feeding them will bring wealth and good fortune.

In fact, the cat population is now greater than the human population and there are no pet dogs on the island at all. Most of the locals are involved in the fishing industry or hospitality, and they believe the cats bring them good luck. Even many of the hospitality lodges are built to resemble cats.

These freaky felines were originally imported to the island to hunt mice, and now their population has gotten out of control. Yet, the locals don’t seem to mind. 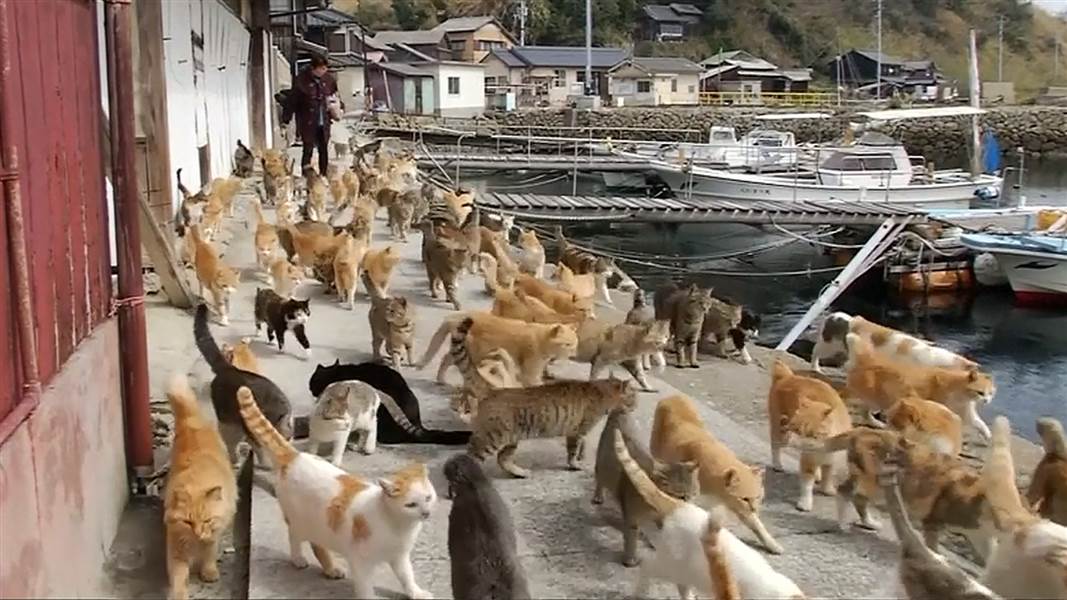 The Akodessewa Fetish Market is located at Akodessaswa in Toga, West Africa and it is known for being the world’s largest voodoo market.The Akodessewa is a mecca to local practitioners and they travel there from all over Africa.

The market sells shrunken heads, skulls, dead birds, skins and other products of dead animals. These areparticular supplies used by those practicingvoodoo and the other indigenous religions of West Africa.

This is a place where you can find anything from human skulls to voodoo priests who bless charms, predict the future, and make healing medicinal treatments.

Voodoo is a longstanding tradition in Togo, and at the Akodessewa Fetish Market, you can find every type of voodoo creature imaginable and in various stages of decay stacked up in stinky and horrific piles. And while this practice seems disturbing to many of us in the West, it is a sacred religion to the Togo locals. 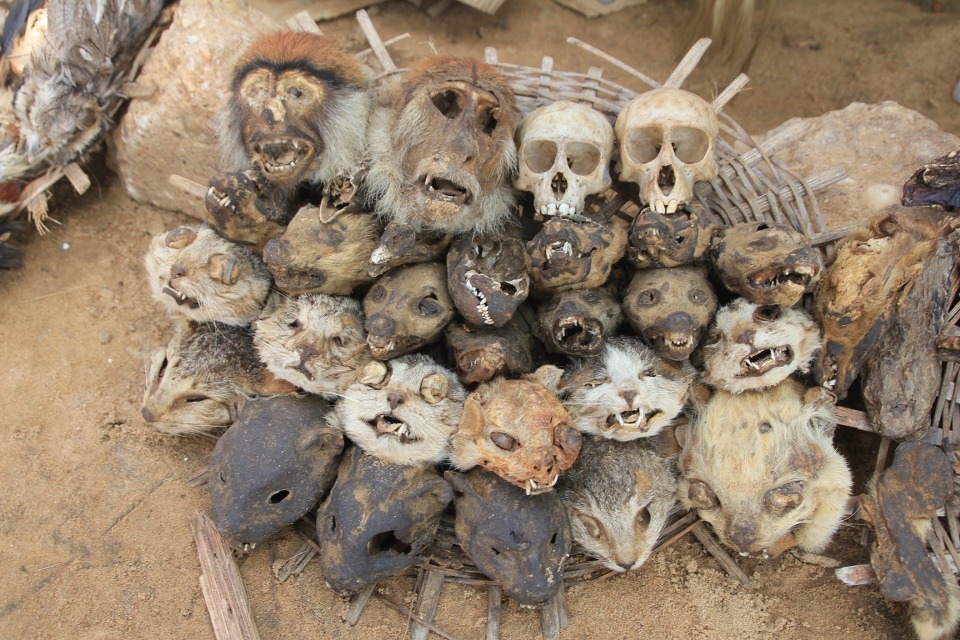 The psychiatric hospital is known as one of South Korea’s three major haunted sites (the other two being Youngdeok haunted house and the Neulbom).

It was closed and abandoned over 15 years ago after people freakishly began dying in the hospital. There was no real investigation as to why people died so mysteriously, the institute just completely shut down.

Today, the dirty building still stands as its exterior is torn up, the ash-gray pipes are exposed, and the wire fencing is rusted. The windows are shattered into thousands of pieces and no one has bothered to pick up the broken glass. The interior of the building is even scarier as the long hallways are completely dark and eerie. Each room also has it own freaky character. All of the examination tables, white-coats, sticky notes, and old comic books were also just left behind as if everyone evacuated the building in a hurry. But nobody knows why.

Either way, this is definitely not a place to visit at night. 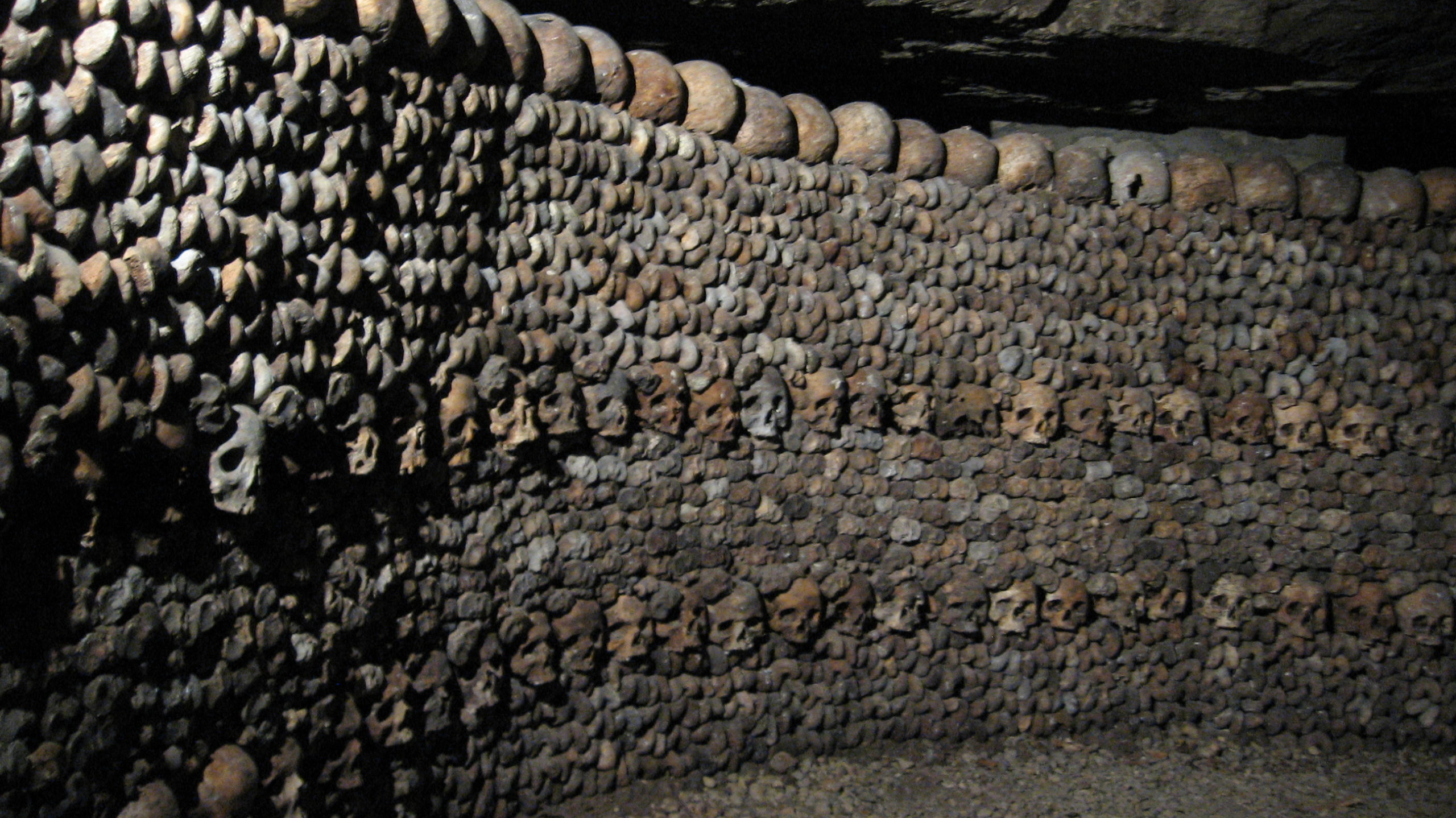 The Catacombs of Paris is a network of old quarry tunnels beneath the city, which hold the remains of more than six million deceased Parisians.

This ossuary was founded when city officials in the 18th century had to address two significant problems: a series of cave-ins and overflowing cemeteries.

Remains were transferred from 1786 to 1788 from other cemeteries to the reinforced tunnels and more remains were added in later years. Most of the Parisians buried in this cemetery are anonymous.

Nonetheless, this creepy underground graveyard has been open to the public since 1874 and it has attracted thousands of tourists over the past 140 years.