Throughout warfare, generals and commanders have always sought the ultimate weapon, one that will stop the enemy dead and win wars. Other than nuclear weapons, which we can all agree will stop everyone dead, armies through the ages have had some novel ideas on how to gain the upper hand. 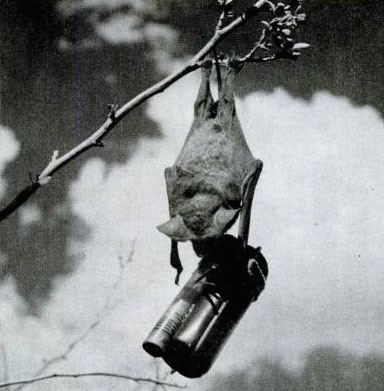 Not something thrown by the Caped Crusader, but literally bombs strapped to bats. After the attack on Pearl Harbor and before the deployment of the atomic bombs in 1945, the US chain of command were pondering how they could inflict maximum damage on the Japanese homeland in order to shorten the war. Some genius came up with the bat bombs. The idea was that incendiary devices would be strapped to Mexican free-tailed bats and thousands of these bats would be released from aircraft over Tokyo.

The bats would naturally roost in the roofs of the buildings of the Japanese capital, and the devices would, at a pre-arranged time, explode and set fire to the building. The aim was to create a firestorm that destroyed Tokyo. During testing, the bats took up residence in the USAF test building, burning it to the ground. Thankfully, the idea was dropped once the atomic bomb became operational. The bat population of America could continue to sleep easy. 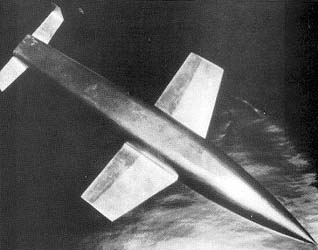 After declaring war on the US in 1941, Nazi Germany began to consider how it could bring the conflict to the US homeland. U-boats could only torpedo shipping, battleships could hit a few coastal targets if they were willing to expose themselves to US coastal defences, and conventional aircraft simply didn’t have the range required to be effective, particularly with the battle of the Atlantic ranging, putting aircraft carriers in danger. So, the Nazi boffins came up with the ‘Amerika Bomber’ initiative, to design a revolutionary aircraft that could put major US cities within bombing range.

The Silbervoge, was to be launched from a 2-mile-long rail at a speed of 1200 MPH by means of a rocket-powered sled. One launched, the craft would fire its own rocket engines and climb to an altitude of 90 miles and a speed of 13,000 MPH. As the plane descended the increasing air density would cause it to ‘bounce’ back up, and thus by a series of decreasing bounces, the plane would reach the US mainland, at which point a 8000 pound bomb would explode. The one drawback with this masterplan was that the technology didn’t exist to do it. So all that ever existed was a model. Failure before launch. 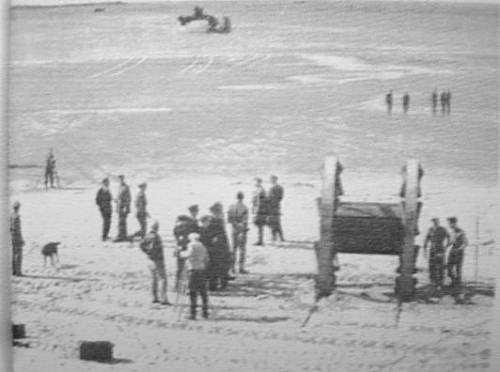 Planning for the invasion of Europe, which would eventually occur on D-Day, 6 June 1944, began a year or so earlier. One of the problems that had to be solved was how troops were going to move across the heavily defended beaches of Normandy and breach Hitler’s feared Atlantic Wall. The British came up with the Panjandrum. This was to have been a device that consisted of two rocket-propelled wheels ten feet in diameter that were joined by an explosive-filled cylinder.

The plan was that the Panjandrums would be launched from landing craft and power their way across the beach to blow holes in walls, or wire defences, and thus clear the way for the troops to follow. Unfortunately, the tests were a disaster, as the devices could not be guided, and went off in every direction expect the intended one. The idea was scrapped as the British army couldn’t guarantee that its own men would be safe from the crazy rolling bombs. They never saw action. 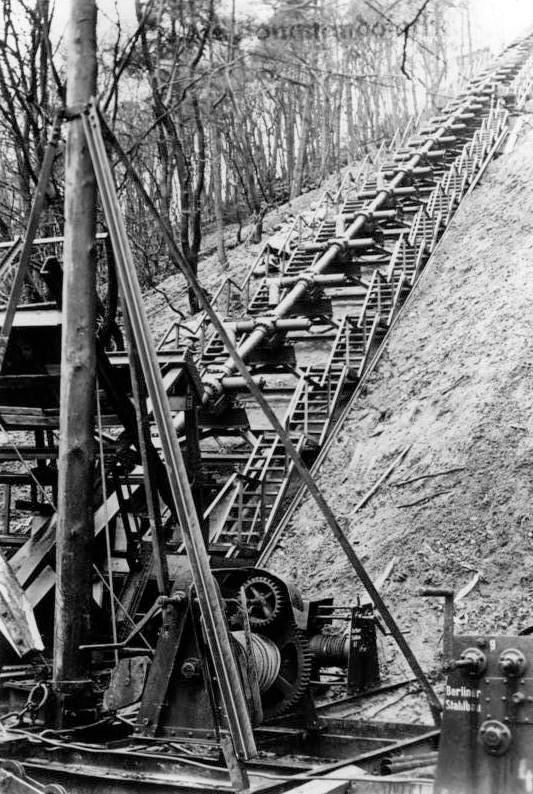 The Nazi Vergeltungswaffe (Retaliation Weapon) programme had two reasonable successful stages. The V1s, or ‘Buzz Bombs’ terrified Londoners in 1943/44 as they flew across the English Channels and hit random targets. The V2, a rocket, was even more feared as it dropped from the stratosphere to explode unexpectedly. There was a third stage, however, the V3. This was an underground supergun (a prototype of which can be seen above) designed to target London from its bunker just outside Calais.

The design of the gun was that secondary charges firing in sequence along the huge barrel would accelerate the shell to a sufficient velocity to carry it to London. The plan was to fire 600 shells an hour from a battery of 25 V3 guns. The Royal Air Force, searching for V2 launch sites, unwittingly bombed the V3 battery in 1943. A second bombing raid in July 1944 put the guns permanently out of action before they had ever fired a shot. 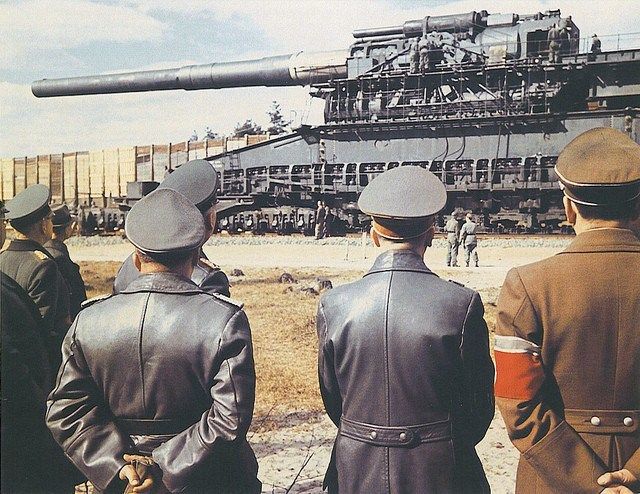 Enormous railway guns were all the rage in the FirstWorld War. The most famous of them was Big Bertha. The idea was revived by the Nazis in the 1930s, and work began on a number of railway artillery. The biggest was called Schwerer Gustav, with a 31.5 inch diameter barrel and a weight of 1400 tons. It could fire a 7 tons shell up to 29 miles. Designed to assist in the invasion of France, it was not ready, and so the Germans used it in the invasion of the Soviet Union. However, it was only fired 47 times before its barrel wore out, leaving it useless. The development of aerial bombing made further development of such huge guns pointless. 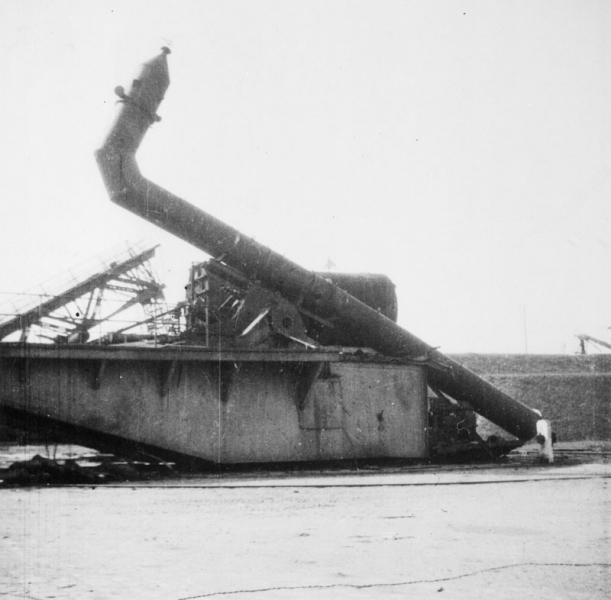 The Nazis were apparently obsessed with super weapons, but the Wind Cannon is by far the weirdest. It consisted of a large barrel that was bent at near 90 degrees at one end. The idea was that a huge blast of compressed air would be shot out of the cannon and would literally knock aircraft from the sky. In ground tests, significant damage was inflicted on stationery planes. The problem is that in the air planes tend to travel rather fast. And the single wind cannon installed, on the River Elbe, failed to hit a single target before it was abandoned. 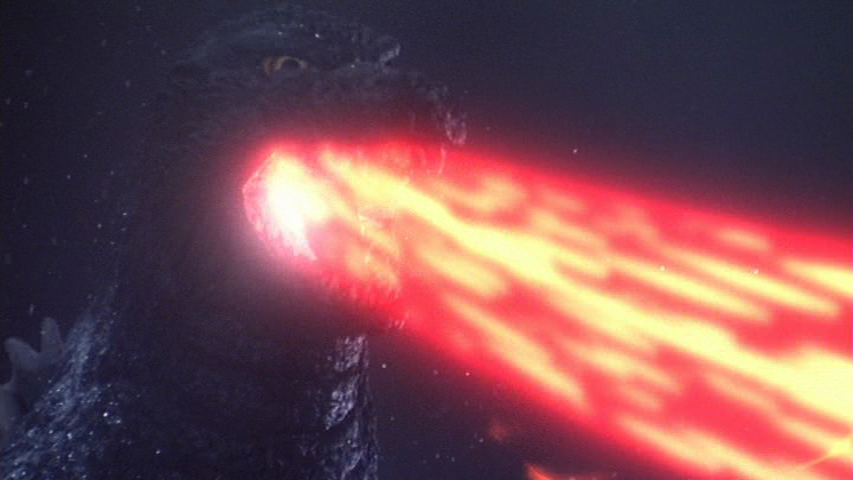 This sounds like something from the HG Wells novel ‘War of the Worlds’ but it dates instead from 2010. The US military created the Active Denial System. A satellite dish sized device could direct extremely high frequency waves at a target, and the target would experience the attack as severe heat. It cost $40 million and ten years to develop, and was to be deployed in Afghanistan, but was mothballed after only a month of tests. It seems that far from delivering a fatal heat blast that would decimate the enemy, the most the superweapon could manage was a bad case of sunburn. At best, this military grade weapon would function as a crowd control device. Hardly a winning strategy.