Three weeks before Labor Day Weekend, we lost an icon who is connected with the Labor Day weekend. From 1966 until 2010 you could expect Jerry Lewis without fail to be the spokesman for the Muscular Dystrophy Association on its round the clock television fund raiser that started Sunday Night and lasted until Labor Day afternoon. The day that honored the American Labor Movement was also recognized as awareness of Muscular Dystrophy and other related disorders. It is not that Jerry Lewis wanted to do it on Labor Day Weekend, it was the only time that Lewis could do it. But before Lewis became more famous with the annual MDA telethon, he became famous in several comedic movies that he did as one half with Dean Martin and then later on going solo. Frank Sinatra did remind Jerry and the audience of the Martin/Lewis partnership when he made the arrangement of a reunion on the telethon itself in 1976. Two of the movies in my top ten list of Jerry Lewis movies are Lewis/Martin movies and all the movies featured in the top ten are all in Lewis’s primetime on the movie screen. It should also be noted that while he was noted for his slapstick comedic movies, and was also a talented singer, producer, director and screenwriter as well. Lest we forget that the French people loved Jerry Lewis with a passion, and I do mean the FRENCH French. Yep good ole France, and not Quebec, Canada. 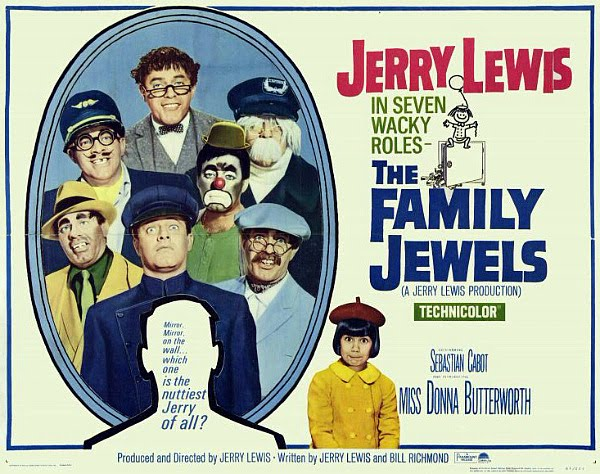 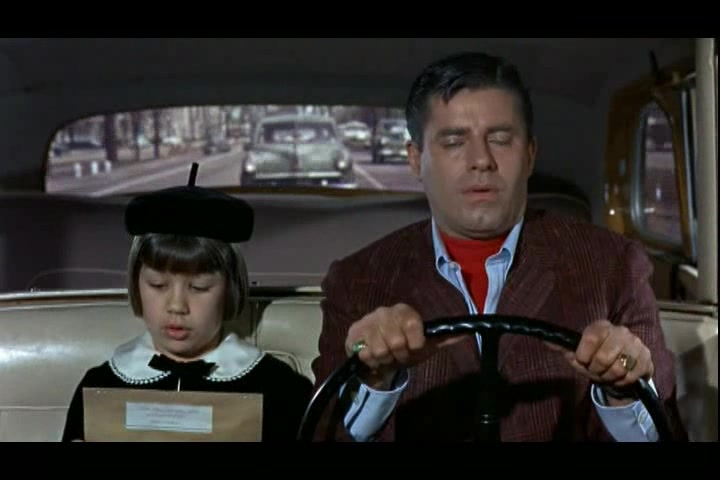 10. The Family Jewels (1965): In this movie Jerry Lewis (who also co-wrote, produced and directed) plays seven roles. Long before Eddie Murphy pulled off a similar feet. Six of them are the uncles of the protagonist ten year old Donna Peyton (played by Donna Butterworth). In the end Peyton choses, the unrelated Willard Woodward (played by Lewis however) but the lawyers prevent that from happening. Woodward does have a trick up his sleeve to win the day. Why not, if you look like all the uncles look like Jerry Lewis anyway…oh and one of the uncles was modeled after Professor Kelp from “The Nutty Professor” (andshared the first name Julius) and later on several of the uncles would become characters on the Filmationanimated TV series “Will The Real Jerry Lewis Please Sit Down.” HoweverFilmation did not involve Lewis that much in that respected project. 9. The Geisha Boy (1958): In this movie Jerry Lewis plays Gilbert Wooley, a down on his luck magician who goes on a USO tour of Japan and along the way befriends a young boy who is enamored with Wooley, while most of the adults (except for love interest Sergeant Pearson played by future Bob Newhart Show star Suzanne Pleshette in her first movie role) just want Wooley out of way. After one misadventure after another, Wooley settles down in Japan and finds out that his pet rabbit is not male but female when she has her babies…and Lewis as Wooley spits out one of his best lines…. coupled with the movie’s use of “The Merry Go Round Broke Down” which is the official theme of Warner Bros. Animation’s Looney Tunes (in spite of “The Geisha Boy” produced by Paramount Pictures) along with its famous closing card “That’s All Folks.” That will be somewhat revisited in “The Nutty Professor.” 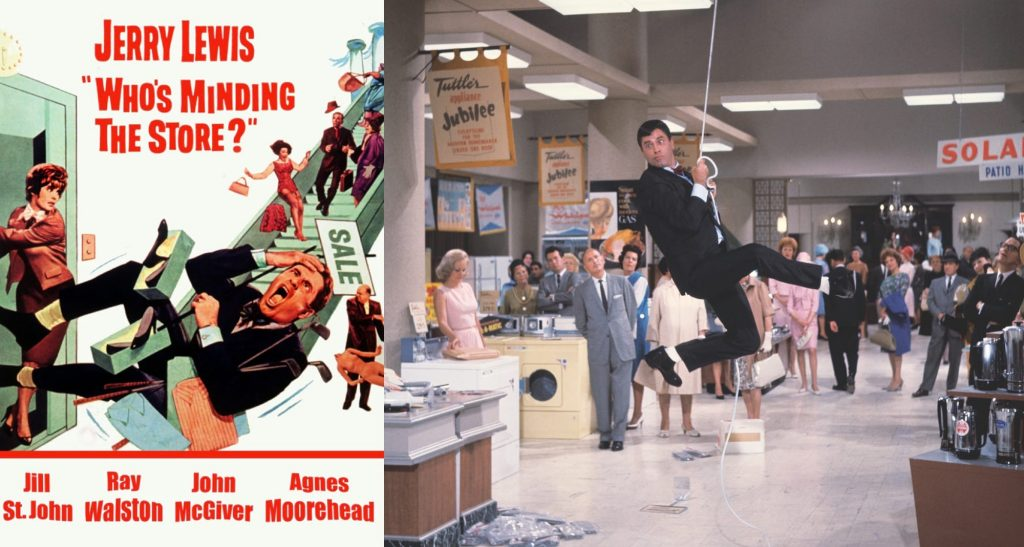 8. Who’s Minding the Store? (1963): Jerry Lewis plays Norman Phiffier who makes a living walking other people’s dogs. He is also the love interest of Barbara Tuttle (played by future Bond Girl Jill St. John) who is the heiress of her family’s department store business (unknown to Phiffier). Barbara’s mother Phoebe (Agnes Moorehead) is not found of the fact that her daughter is engaged to someone that is lower than her family’s class but still hires Phiffier to work at Tuttle Department store. In spite of Phoebe giving Norman demanding challenges, Norman is determined to overcome the odds and beat them, and making an impression on Tuttle’s store manager Mr. Quimby (played by Ray Walston). In spite of Phiffier’s mishaps he is a man of scruples and eventually quits his job not because of the hard work, but because he learns Barbara’s secret. In the end Mrs. Tuttle realizes that he is not trying to marry into money, and accepts him as family and a part of the family business. 7. The Disorderly Orderly (1964): In this movie Jerry plays Jerome Littlefield who is “The Disorderly Orderly” at a Sanatorium and Hospital. Littlefield has “neurotic identification empathy” and that causes our title character of this Jerry Lewis picture to suffer the symptoms of others and constantly lose focus of his job. His high school crush is admitted to the Sanatorium after trying to kill herself and Littlefield realizes that his unresolved feelings for her are the cause of his mental disorder. While he can’t make a love connection with her, Littlefield does help her give the will to live. Eventually after making a mess of a grocery store, Littlefield overcomes his mental disorder and returns to medical school. 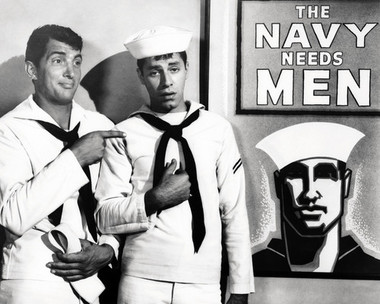 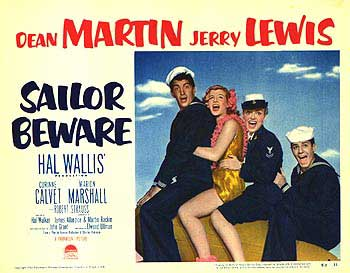 6. Sailor Beware (1952): The first of two movies that are part of the Lewis partnership with Dean Martin on this top ten list. Dean Martin plays Al Crowthers who is finally accepted into the Navy along with Melvin Jones (played by Lewis) who Al becomes fast friends with. Al wanted to join the Navy so that he can impress the ladies, while Melvin joined as a way to spend time at sea as prescribed by his Doctor in way that he could afford it. You see Melvin is allergic to women’s cosmetics and makeup and maybe ocean travel can help Melvin with his allergy. Al and Melvin have many misadventures and win the hearts of a few women along the way. 5. The Caddy (1953): The second Martin/Lewis movie on this list devoted to Jerry Lewis and this Martin/Lewis movie is at the peak of the Martin/Lewis partnership before it goes downhill. Jerry Lewis plays Harvey Miller whose father was a professional golfer. Miller has a fear of crowds of people so he becomes a golf instructor instead. First client for Harvey is Dean Martin’s character Joe Anthony who is the brother of Harvey’s fiancée Lisa. Joe is great at the sport and hires Harvey to be his caddy.However, Joe’s ego goes over his head and butt heads with Harvey which eventually gets Joe ran out of a golf tournament. The surprise twist in this picture is that a talent scout discovers them and believes their “act” and breaks them into show business. The biggest overall surprise is that Joe Anthony and Harvey Miller meet a comedy duo that truly mirrors them…its none other than Dean Martin and Jerry Lewis as THEMSELVES!!! Talk about “That’s Amore” which is sung by Martin in this film. 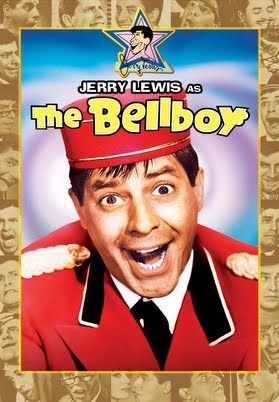 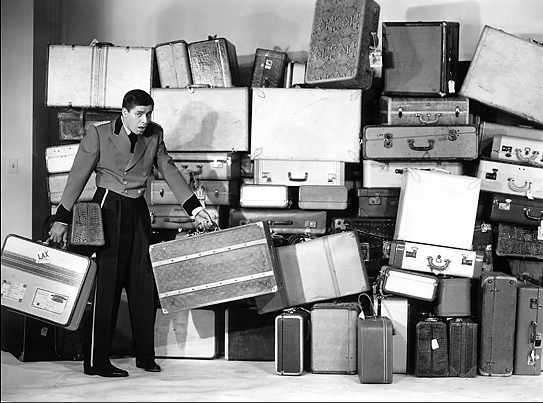 4. The Bellboy (1960): Long before Rowan Atkinson played Mr. Bean or Jerry Senfield’s sitcom about “nothing”, Jerry Lewis played a hotel bellboy of very few words named Stanley in a movie in which “a studio executive” claimed that had no plot. It was about Stanley in true Jerry Lewis fashion in one slapstick mess after another in spite of his good efforts to be the best employee. Jerry Lewis also plays himself in the film as a guest at the hotel Stanley works for. 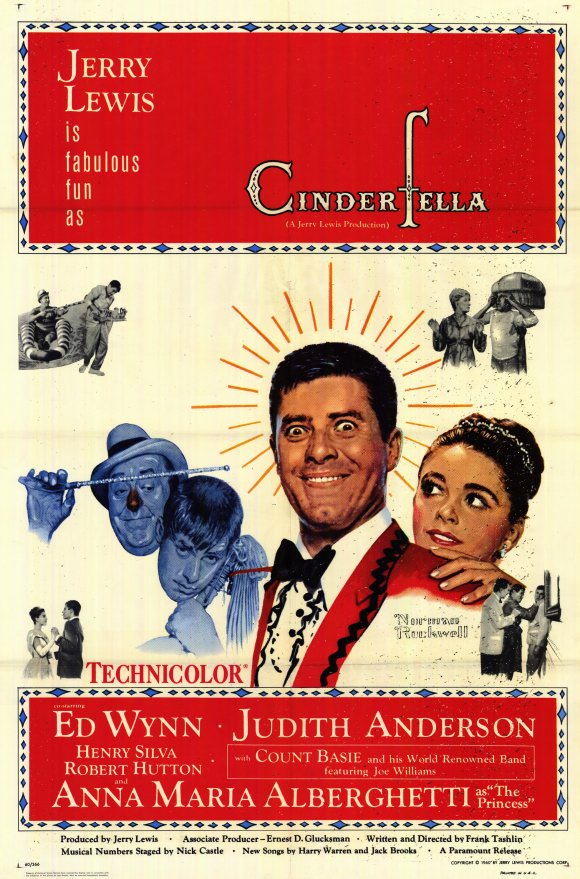 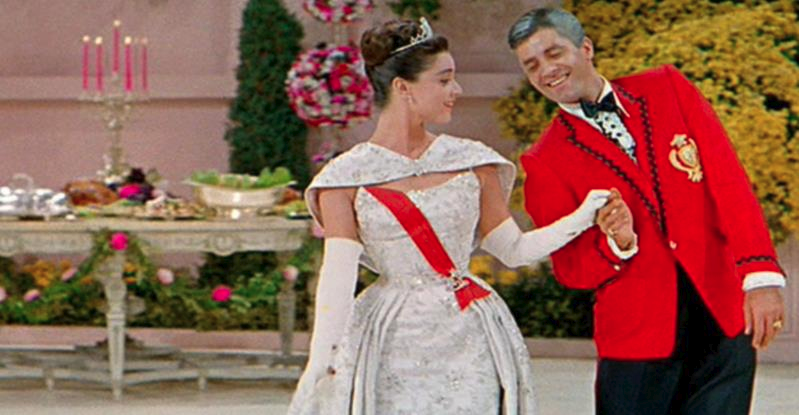 3. Cinderfella (1960): A gender bending adaptation of the fairy tale Cinderella. Jerry Lewis plays Fella who is the underdog to the stepmother and her SONS and is reduced to being their butler and the step family wants to screw Fella over to what is rightfully his. In this tale it’s the stepmother who arranges a ball as a way for her sons to settle down. Naturally it’s the “sucks to be you” approach with Fella’s stepmother so enter his Fairy GodFATHER to move the plot along and help Fella become a “Person.” In the end the Princess and Fella become an item and she admits that she is a “people” deep down inside. 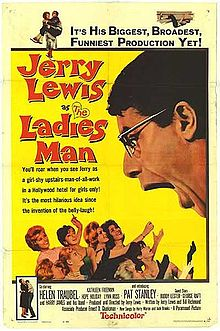 2. The Ladies Man (1961): “Hey Lady!” That would become one of Jerry’s best lines and even parody in Mike Elliot and Bud LaTour’s “Rock Me Jerry Lewis” which itself is a parody of Falco’s international hit “Rock Me Amadeus.” Jerry Lewis plays Herbert H Herbert who love life falls flat but still takes a job at a boarding house for women and meets a woman named Fay (Pat Stanley) as she helps him out of his funk and overcome his fear of the fairer sex. 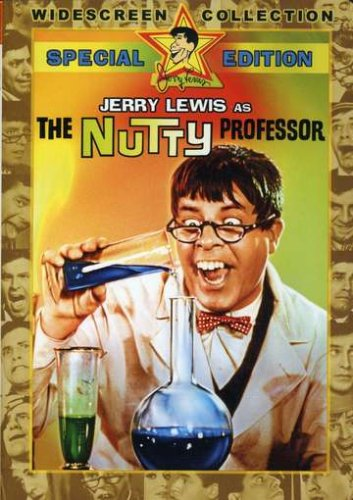 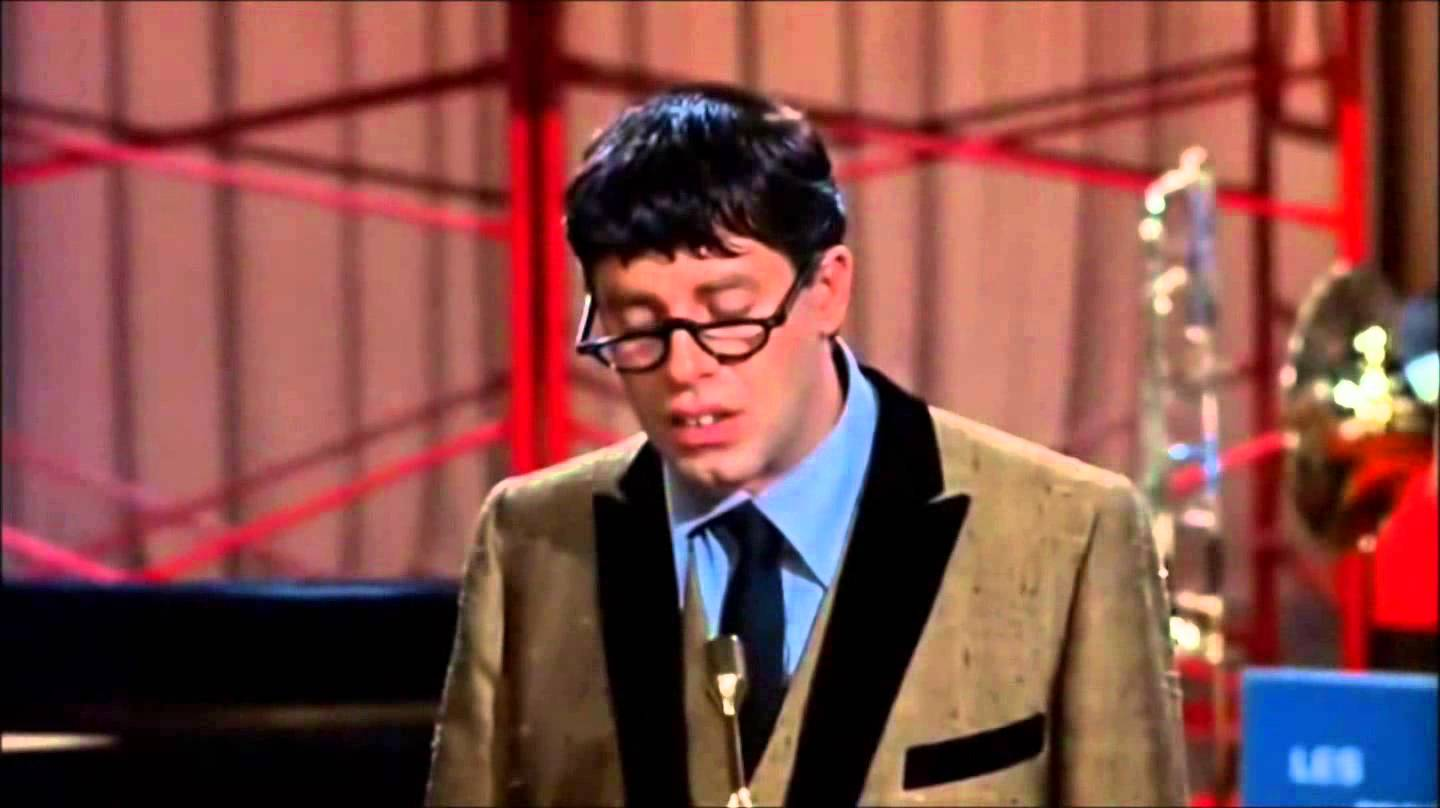 1. The Nutty Professor (1963): The film that says Jerry Lewis in spite of the reimagined version done by Eddie Murphy in the late 1990’s. The original Nutty Professor with Jerry Lewis as Professor Julius Kelp is his crowning achievement…in spite of that character somewhat visited years later in “The Family Jewels.” At the beginning of the film you don’t see what Kelp really looks like other than his hands doing risky experiments for his students, as you hear the movie’s theme song “Stella By Starlight.” One experiment goes bad and a sight gag fest follows. Eventually the movie takes a page from the Robert Louis Stevenson novel “The Strange Case of Dr. Jekyll and Mr. Hyde” in which Professor Kelp creates a serum to help him overcome his socially flawed shortcomings. While the first transformation sequence (and the only long one played out on screen) has you thinking that Kelp is becoming another Hyde, he instead turns into a suave attractive but morale flawed hipster named Buddy Love. This was the “middle part” of the movie you were not to spoil to your friends who have not seen the movie yet when it was first released. The best parts of the movie are when Kelp’s serum is wearing off at times when he does not want it to happen coupled with Love’s hip voice is being replaced by his true voice as Kelp. Love is invited to perform at the student dance at which Kelp teaches at, and in the end Buddy Love/Julius Kelp gives a speech about his mistakes and learning to love himself. He wins college student Stella Purdy (Stella Stevens) over (“but That’s NOT All Folks” which played on The Geisha Boy’s surprise ending)and they will take likely drink Kelp’s potion before having a good romp in bed…after they get married of course. The ending credits are also great to watch as the cast bows before the camera as if they were doing a live performance of the story. Lewis as Kelp attempts his bow but only destroys the camera (by mistake of course) and brings Jerry’s best picture of alltime to an end…Priceless.